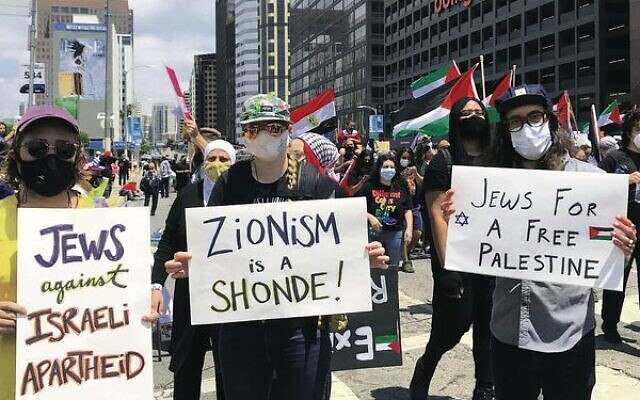 US Jews protesting against Israel earlier this year. Photo: Facebook/Jewish Voices for Peace

SO much of what I’ve been reading of late bemoans the increasingly problematic relationship between American Jewry and Israel – a situation recently described in The New York Times as “the unravelling of American Zionism”.

The article had me reflecting on a trip to Israel I made when I was just 21 years old and which I wrote about in this very newspaper some 20 years ago.

I was in Poland attending a seminar on the Holocaust along with a group of American college students and, as it turned out, the trip was a real eye-opener for me.

Like us all, I was a creature of my environment. I grew up in the fairly insular post-Holocaust Jewish community of Melbourne, within the city’s somewhat more insular Modern Orthodox community.

The American college students on the trip came from dramatically diverse Jewish backgrounds – some from the Reform/Conservative movements of the time, which bore very little resemblance to equivalent movements in Australia. Very few had had an upbringing so permeated by the Holocaust.

The day we visited Treblinka, something happened that profoundly impacted me.

Apart from the infamous train tracks and mass graves, there is nothing that remains of the camp itself. What one sees are thousands of different sized stones, each bearing the name of a Jewish community wiped out by the Nazis.

Despite the magnitude of the moment, my reaction was almost clinical and I remember that it troubled me.

It was only at the conclusion of the tekes – a ceremony where we took turns reading tefillot, poetry and the names of victims – that something stirred.

Standing on the ground where one third of World Jewry was murdered, surrounded by monuments to long lost Jewish communities, we sung Hatikvah.

The legacy of those lost Jewish communities would not be confined to a monument of stones, but with the living, breathing miracle that was the modern state of Israel.

That evening, Laura – another student – told the group that she and other participants had felt the singing of Hatikvah at Treblinka had been inappropriate because it politicised the Holocaust and was a form of “aliyah bashing”.

And it immediately dawned on me that the very same experience that had inspired me had had exactly the opposite effect on Laura.

Since that day at Treblinka, the Jewish Diaspora has changed dramatically – the disconnect with Israel that shocked me back then has become almost unremarkable, which bothers me all the more.

Take the letter by 90 American rabbinical students during the recent conflict between Israel and Hamas, accusing Israel of “violent suppression of human rights” without making any reference to the Hamas rockets attacks.

Take the findings of a recent survey conducted by the Jewish Electorate Institute showing that:

The survey was undertaken soon after the Abraham Accords were signed. And while American Jewish respondents were pointing the finger at Israel, not a single Arab country had recalled its ambassador in response.

Is it possible Israel can now expect more support from the Arab world than from the largest Diaspora Jewish community?

Of course, this survey is not representative of all American Jewry, but it cannot be ignored. And we need to ask ourselves how we got here and what we can do about it.

Caroline Glick suggested that Israelis shouldn’t be concerned by the survey because in one or two generations, most of the respondents would have assimilated. US Jewry will be smaller in number but consist of Orthodox or other similarly committed Jews who are more supportive of Israel.

Other commentators, including Peter Beinart, suggest the troubling shift in sentiment in America is the direct result of successive right-wing Israeli governments. That US Jews, who are mostly progressive, cannot reconcile Israeli government policies with their own values.

That if only Israel “ended the occupation” everything would be okay and Americans would fall back in love with the place.

With respect to both Caroline Glick and Peter Beinart, I strongly disagree.

Laura’s discomfort singing Hatikvah at Treblinka had nothing to do with the conflict. But nor, in my view, do the alarming survey results.

And Glick’s suggestion that we accept the disappearance of a substantial proportion of the Jewish people because we have drifted apart is, I believe, fundamentally inconsistent with Jewish values.

The challenges we face in Australia are very different to those faced by American Jewry. And I don’t believe that we are simply 10-15 years away from experiencing the same fate.

But nor do I believe that our best defence is “hasbara” training. Jewish identity is not partisan. It is not left or right.

The only antidote for what’s happening to American Jewry and for ensuring the same phenomena doesn’t ever descend upon our community is … education.

We must ensure that our entire community is Jewishly literate, that people are equipped with an intellectual as well as emotional connection to Israel and Jewish values.

This is why, as a community we must continue to invest in Jewish education and programs such as Masa and Birthright which are a proven vehicle to ensuring that the next generation of Australian Jews are meaningfully engaged and connected with their Jewish identity and the State of Israel.

Jeremy Leibler is president of the Zionist Federation of Australia. This is an edited extract from a speech he delivered to the ZFA’s plenary on November 21.