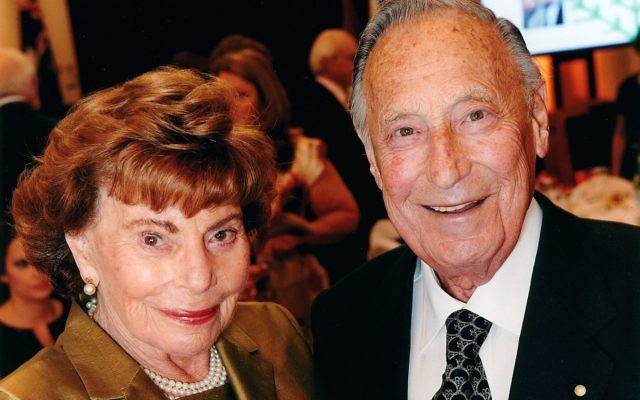 TRAUMA was no stranger to the late Les Erdi. During the Holocaust, he narrowly escaped a Nazi firing squad in occupied Hungary.

Fittingly a foundation run by his widow Eva has become the largest single donor to a major Australian hospital’s trauma centre.

Les triumphed over the challenges of his early life, becoming a dynamic Melbourne property developer. Now Eva is continuing the couple’s tradition of philanthropy by helping trauma victims at The Alfred Hospital.

Les, who died at 91, on Australia Day in 2013, established the ErdiGroup, which grew into a successful privately owned and operated Australian company, encompassing hotels and business across Australia.

The Alfred’s new, expanded Eva and Les Erdi Emergency and Trauma Centre has now been made possible through the largest single donation ever made to The Alfred.

Alfred Health chief executive, Associate Professor Andrew Way, said there had been many individuals who have supported the hospital’s Bigger and Better Emergency and Trauma Centre Appeal over the past 18 months, but described the Erdi donation as “truly remarkable”.

“In addition to government funding, The Alfred is fortunate to receive significant community support, and the generosity of Mrs Eva Erdi and her foundation is testament to the philanthropic spirit that exists throughout Victoria,” he said.

Eva Erdi was publicly thanked at an event held at The Alfred on June 30, which acknowledged her gift and the memory of her late husband.

The event saw the launch of the Eva and Les Erdi Emergency and Trauma Centre.

The Alfred’s Emergency and Trauma Centre provides treatment for more than 60,000 Victorians each year, including more treatment areas, and the creation of an additional fifth trauma bay for Australia’s busiest trauma centre.

Les was a prolific philanthropist, underpinning initiatives such as the Australian “One Billion Trees” project to combat carbon emissions.

He also threw his financial support behind the Diabetic Institute, Leukaemia Foundation and Melbourne Research at the University of Melbourne.

The Jewish Film Festival, Emmy Monash Home and Elwood shul’s refurbishment have been beneficiaries of Les and Eva Erdi’s philanthropy.

Declared 2011 Senior Australian of the Year for Victoria, Erdi was also recognised with a Centenary Medal in 2001, a Medal of the Order of Australia in 2008 for services to the community, and an Honorary Doctorate of Laws at Monash University in 2010.