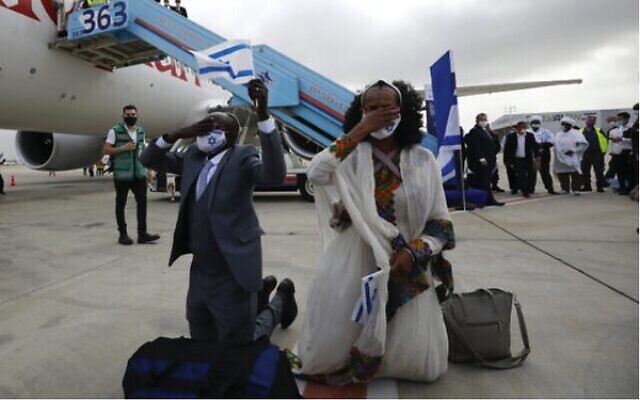 Those included in the agreement have first-degree relatives in Israel and were eligible to immigrate under a 2015 government decision, under which 9000 people would be brought to the Jewish State.

There had been a reported suspension of a planned airlift of 800 people following what was said to be a “difficult” meeting on Monday between Shaked and Tamano-Shata, according to Channel 13 news.

Haaretz said Tamano-Shata, who is of Ethiopian descent, threatened to quit her post if no more people were airlifted.

There are thought to be 7000 to 12,000 Ethiopian community members still waiting to come to Israel, many of whom live in the Tigray region, at the heart of the conflict.

Others, who left their villages years ago, eke out livings near the Jewish community centres in Gondar City and Addis Ababa. Many have been waiting for decades to immigrate.

Pressure has been ramped up on Israel in recent weeks to bring thousands of members of Ethiopia’s Jewish community to Israel, as an insurgency by Tigray rebels intensified and neared the capital Addis Ababa.

“We must continue to bring them over to Israel quickly,” President Isaac Herzog said.

The Channel 13 report claimed that those slated to be brought to Israel were in no immediate, concrete danger due to their Jewishness. But there may also be doubt as to whether they are all Jews, after media reports said on Sunday that dozens of Ethiopians participating in the secret operation may have misrepresented their Jewish ancestry.

Members of the community involved in the effort denied the accusations.

Since fighting broke out a year ago, over 2000 Ethiopian Jews have been brought to Israel in state-run operations.

Though the plan to spirit them to Israel was put together during the tenure of former prime minister Benjamin Netanyahu, it was the cabinet of his successor Naftali Bennett that signed off on it, Haaretz reported.

Channel 13 news cited a security source involved in the matter saying at least four officers among the over 2000 people brought to Israel over the past year, are suspected of taking part in rebel massacres in the Tigray region.