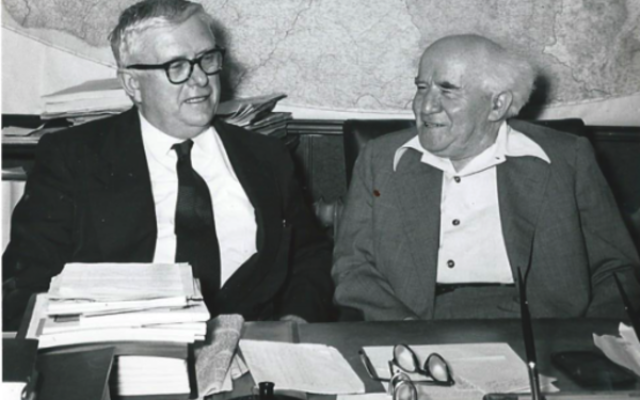 On November 29, 1947 the United Nations General Assembly voted, by 33 votes to 13, with 10 countries abstaining and one absent, to approve a plan to partition the territory known as Mandatory Palestine into two states, one Jewish and one Arab.

One of the leading architects of the plan was Australia’s Dr H V (‘Doc’) Evatt, Minister for External Affairs in the Chifley Labor government, a strong supporter of the Zionist movement. Evatt was president of the General Assembly from 1948-49, and as chair of the Ad Hoc Committee on the Palestinian Question he led the negotiations that brought about the Partition Plan. He regarded the establishment of Israel as a great victory for the UN.

It’s an immense moment of pride to be captured in that historical first yes vote under the leadership of Doc Evatt:

With the passage of the Partition Plan, Evatt cemented himself further as a highly influential leader of the UN, after having also played an instrumental role in the drafting of the Universal Declaration of Human Rights in 1945.

It was at this San Francisco 1945 conference where The New York Times paid tribute to his performance on the world stage:

“When Dr Evatt came [to the UN] he was a virtually unknown second-string delegate, with the background of a professor and Labor politician. He leaves, recognised as the most brilliant and effective voice of the Small Powers, a leading statesman for the world’s conscience.”

These qualities no doubt drove his determination to proceed with the UN Partition Plan. As president of the General Assembly, Evatt also presided over the historic May 1949 vote admitting Israel as the 59th member of the UN. In the same month, the Chifley Labor government opened Australia’s embassy in Tel Aviv.

In 1978, Labor leader Bill Hayden joined with prime minister Malcolm Fraser to mark the significance of agreements reached between Israel and Egypt at Camp David.

Hayden stated: “… There is no question but that Israel must continue to exist as an independent sovereign state. Through the efforts of Dr Evatt when he was minister for external affairs in a national Labor government in this country, my party feels a keen sense of involvement in the future integrity of an Israeli state. Dr Evatt played a central role in the founding of the state of Israel – an event which illustrated dramatically the Labor party’s long-held commitments to protection of the rights of individuals and minorities.”

In 1991, prime minister Bob Hawke in the same speech where he condemned an Iraqi unprovoked attack on Israel, also drew inspiration from Evatt’s words about the obligations of nations.

“In 1945 Dr Evatt said: ‘It must be made crystal clear that the nations seeking representation in the world organisations must be prepared to contribute their share of physical force to restrain the action of proved aggressors.’ It was crystal clear in 1945, and it remains so today. This country did not question the truth of that statement then, nor should it now.”

Today Evatt’s contribution on the international stage is still influencing the way Australia positions itself. In a speech to the UN in September of this year, Foreign Minister Penny Wong spoke about Evatt’s legacy in standing up for small and medium countries, working together as one, and not letting the great powers decide our fates.

Evatt may have been Australia’s only ever president of the United Nations General Assembly, but his resounding legacy for Australia and Israel’s long-term friendship is a bedrock on which we continue to build upon today.

His role in nation building and establishing how Australia can play a constructive role in the peaceful establishment of societies, especially in the Middle East, remains a steadfast inspiration.

In the great tradition of Evatt, we must recommit ourselves to play a constructive role for Israelis and Palestinians alike.

With 75 years since the historic Partition Plan vote, I can only hope that one day we will see peace and prosperity for Israel and all of her neighbours, just as Evatt envisaged.

Josh Burns is the federal Member for Macnamara.