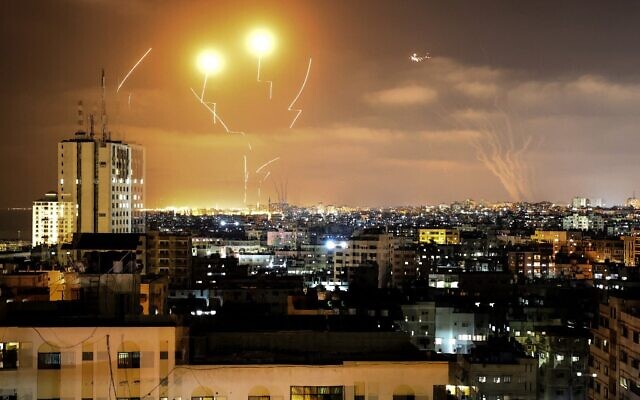 Rockets fired towards Israel from Gaza City are intercepted by Israel's Iron Dome Aerial Defence System on May 10, 2021. (Photo by MAHMUD HAMS / AFP)

HERE we go again. Hamas deliberately sends rockets and missiles from beside residences, knowing that Israel will try and extinguish the source of the deadly attacks.

In the ensuing response, civilians are injured and killed – a propaganda victory for Hamas as the international media presents this as a brutal attack on poor, suffering Palestinian civilians.

In my documentary Eyeless in Gaza (available on YouTube), a resident of Gaza describes how Israel warned residents to evacuate their homes from which rockets have been fired, only to be told by Hamas to remain. Furthermore, a spokesman for Hamas confirms the instructions. After all, Israelis aren’t going to tell Palestinians what to do.

None of this is seen in the international media. What we see are people being brought into hospitals amid panic and chaos and the repeated statement that it’s mainly civilians who are being killed. How do the journalists determine that it is civilians? After all, Hamas militants cannot be distinguished in their attire. The answer to the question of the ratio of civilians to militants is a painstaking investigation which is carried out by MALAM, an institute which specialises in this investigation. Journalists are in too much of a hurry to present today’s headlines to be concerned with such detail, particularly if blaming Israel for brutality is the subtext of the story.

For an understanding of what is happening one can find it in the documentary. While it refers to the Tsuk Eitan war of 2014, this is deja vu, history repeating itself.

Robert Magid is the publisher of The AJN.