“GIVEN the Jewish experience, we have a special responsibility to reach out and support Aboriginal and Torres Strait Islander people,” George Newhouse told The AJN.

The human rights lawyer recently delivered the Earle Hoffman Oration, in which he addressed the relationship between First Nations and Jewish communities.

It has been a particularly topical discussion this week as Australia marked Reconciliation Week. The theme this year is “Be Brave. Make Change” – a challenge to Australians to tackle the unfinished business of reconciliation.

Newhouse has continually called on the leaders of the Jewish community to step up and form meaningful relationships with First Nations Peoples, to help make societal change by taking a stand in solidarity.

“Jews should, and do, understand the meaning of persecution and discrimination,” Newhouse said.

“I grew up in a community surrounded by Holocaust survivors and I felt a deep anger about the injustice of their torment, so when I became aware of the discrimination, violence, harassment, abuse and mistreatment of First Nations peoples I could not turn away from their injustice.”

It was because of the Holocaust that Nic Witton’s parents, Emil and Hannah Witton, became determined to do something about the position of Aboriginal and Torres Strait Islander people in Australia.

They fled Nazi Germany and found refuge in Australia, but soon found there were parallels to the situation they had just left behind.

“They became involved with Aboriginal advancement very early because they realised that the situation they’d been in between 1933-39, when they left Germany, was similar in many respects to the situation of Aboriginal people at the time,” Nic Witton told The AJN.

Emil and Hannah met Indigenous activist Faith Bandler and soon joined the Aboriginal-Australian Fellowship. They were involved in the campaign for the 1967 Referendum, when Australians voted on May 27 to amend the Constitution to allow the Commonwealth to include Aboriginal people in the census.

May 27 is now a significant date in Australia’s history and marks the start of Reconciliation Week each year.

It is not surprising that Nic Witton continues to support Aboriginal communities. Together with John Balint, he is an integral part of Jews for Social Action (JSA), a volunteer social justice group from North Shore Temple Emanuel.

“In that year someone said what is needed is help with young Aboriginal children on the northern side of Sydney’s harbour bridge.

“Because there aren’t very many there, they don’t get any special funding or anything. My realisation was that Aboriginal people were in a very disadvantaged and maligned position in our society.”

“Jews should, and do, understand the meaning of persecution and discrimination” – George Newhouse

JSA, established in 2001, embodies the Jewish values of tikkun olam (repairing the world) by taking a hands-on approach to working towards social justice. JSA’s programs involve volunteers from the Jewish and broader communities working together to support the Aboriginal community, asylum seekers, inclusion and the environment.

Keeping it in the family

Witton’s daughter, Keren Cox-Witton, works by day as a veterinarian for Wildlife Health Australia, but in her spare time volunteers for JSA at Biala Hostel in Sydney’s northern beaches area.

Aboriginal students from the country board at Biala during school terms so they can attend high school in Sydney. JSA coordinates a group of volunteer tutors, mainly teachers from the local area, who visit the hostel each week to help the students with their school homework. 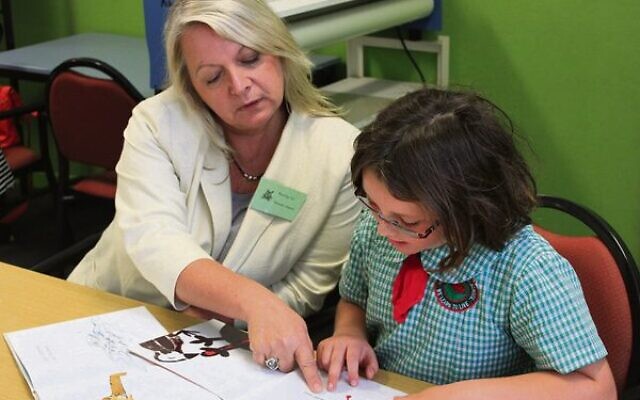 “It’s sort of a family history of involvement,” Cox-Witton told The AJN.

“First Nations justice is really important. I think it’s one of the biggest social justice issues that we’re facing in Australia.

“Those issues have always been discussed and upfront in our family and I think education is a really big part of that sort of fight for justice.

“I just wanted to do something where I could work alongside the First Nations community.”

“There is a link (between Jewish and First Nations communities) and we should do everything we can to help.” – Keren Cox-Witton

Cox-Witton said the Jewish value of tikkun olam inspired her and she feels “privileged” to be volunteering with JSA.

“First Nations justice and reconciliation are so important,” Cox-Witton said.

“I always feel really proud when JSA, or more broadly the Jewish community, take action to work alongside First Nations groups to support them.

“There is a link (between Jewish and First Nations communities) and we should do everything we can to help.”

Emanuel Woollahra Preschool (EWP) is aware of the “magnitude” of early education, particularly when it comes to teaching preschoolers about respect.

“We really want to honour the First Nations culture and embed that into our practice,” said EWP educational leader Bev Smusko.

“And in doing so, there’s a really heavy awareness about the magnitude or the importance of what we’re doing. We’re sharing with our children, who then take this information, knowledge and way of being home to their families. And so together it kind of reaches out into the community. 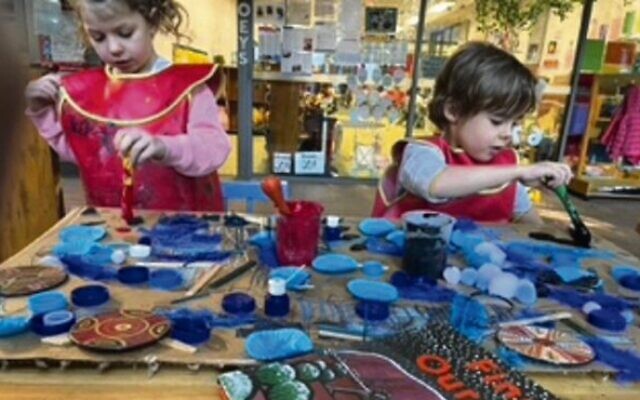 Education through art at EWP.

“It’s really an opportunity to change our outlook and make sure that we are working towards an Australia that really does acknowledge all people.”

But how do you teach preschoolers about a complicated concept like reconciliation?

“So we broke it down. I first showed them the book called Respect by Aunty Fay Muir, which is a very simple book. It just breaks it down to respect for all people, no matter what your nationality, culture, skin or hair colour.

“The children actually know quite a bit about it. They say things like, ‘It’s not fair that white men didn’t ask to share the land,’ and, ‘There’s plenty of space for everybody, we need to care and respect everybody.’

“So the children are obviously talking this language at home with their parents and families.

“It is something that we do on a daily basis from the beginning of the year, starting with a very simple concept of belonging in the classroom.”

Mullet said teaching about culture through art is also a valuable educational tool.

“We really want to honour the First Nations culture and embed that into our practice.” EWP educational leader Bev Smusko.

“I can talk to the children about the colours of the art we’re using and if we’re doing Indigenous paintings they can see it straight away – reds and browns and orange and yellows. They just know because it’s simple,” Mullet said. 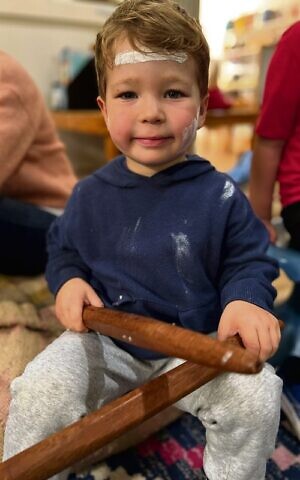 The children learned about Aboriginal symbols and how to use these to tell stories and depict an artwork.

After reading Adam Goodes’ story Somebody’s Land, the children were asked what they thought.

Adrienne said: “It’s not fair because they were there first, and they took over the land. If they want to be friends, they can’t do that to each other. They need to share the space.”

And Juliette added: “They should’ve asked before they said, this is now going to be our land.”

While there is always more that can be done, there are many Jewish organisations doing exceptional outreach work with Aboriginal and Torres Strait Islander communities.

In 2010 the NSW Jewish Board of Deputies published Hand in Hand – Jewish and Indigenous Australians working together by Dr Anne Sarzin and Dr Lisa Miranda Sarzin, recording some of the work that Jewish and First Nations Australians have done together on the road towards reconciliation.

That book is the starting point for the NSW Jewish Board of Deputies’ Hand in Hand digital portal, which provides a comprehensive overview of the Jewish–First Nations relationship in NSW and gives access to important resources from other organisations, including Beit Sefer Yalbalinga, Stand Up’s Derech Eretz, Shalom Gamarada, Tranby and Stories for Simon.

“Australia’s Prime Minister announced a commitment to the Uluru Statement from the Heart in full,” she said.

“It served a reminder that genuinely listening to the voices and experiences of Aboriginal and Torres Strait Islander peoples should be a national priority.”

Stand Up has benefited from the opportunity to do this since 2005, when a group of Jewish students in Sydney set out to establish an enduring relationship with a First Nations community. They were connected with community Elders from Boggabilla and Toomelah (Gomeroi Country), a former mission, who entrusted them with the chance to travel north and facilitate school holiday programs. For 17 years, Stand Up has ensured that Jewish youth continue to return, with the program now known as Derech Eretz.

“Genuinely listening to the voices and experiences of Aboriginal and Torres Strait Islander peoples should be a national priority.” – Tahlia Bowen, Stand Up’s Derech Eretz

Through Derech Eretz, a unique and meaningful friendship has been forged between the Jewish community and the predominantly Aboriginal communities Toomelah and Boggabilla.

The Tikkun Giving Circle was established by Emanuel School students and jointly facilitated by the Australian Jewish Funders and two parents, Michael Pollak and Ruby Berkovic, who have spent the past six months raising funds in support of First Nations people across NSW and the Northern Territory. It was inspired by their May 2021 trip to Jilkminggan in the Northern Territory.

“I was very moved by the commitment of our 18 Emanuel year 7 students to stand up and make a tangible difference to various Indigenous communities after our trip to the Northern Territory,” said Pollak.

“The $5500 raised by our 18 students was beyond what we thought was possible, and I’m now excited for them to see the impact of their actions across the multiple projects they have collectively funded. I’d also like to thank our matching donor, Parc Capital, for supporting the Tikkun Giving Circle, enabling our kids to double their impact.”

When it comes to taking action and expressing solidarity with First Nations people, there is an easy starting point.

Reconciliation Week provides an education and an understanding, and George Newhouse urges people to simply start out by being curious.

“Engaging as an individual is an easy first step,” he said.

Because there are many of them out there.