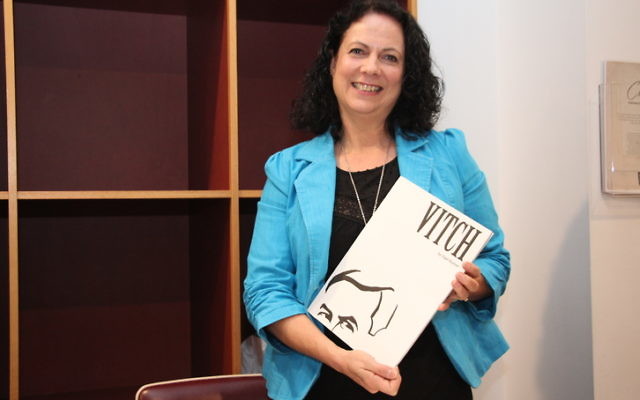 SHANI De Jesus was born when her father was 60, so she didn’t have a great deal of time with him, but she remembers him always doing magic tricks at home and making dinner guests laugh at every opportunity.

“He did talk to me about his past, but it was always about his love of the theatre, his time in Hollywood, and performing all over Europe – things like that – the glamorous parts,” she said.

“He hated the Nazis, but he never talked to me about them – I don’t think he liked to talk about it.”

In Vitch, we learn that Eddie was born in 1903 in Skierniewice, Poland as Ignace Levkovitch and he rose to fame as a young adult in the Parisian cabaret scene before moving to Hollywood in the early 1930s.

It was there where his ability to capture incredible depth of character in simple line drawing caricatures of celebrities and silver screen legends instantly put him in high demand in the contemporary art world, and his work covered the walls of Los Angeles’ iconic Brown Derby restaurant.

But Vitch was forced to return to Europe in 1934 when US authorities refused to renew his temporary visa.

He returned to performing and his mime act – performing alongside stars like Maurice Chevalier and Josephine Baker – became so popular and influential that when Germany invaded France in June 1940, Vitch was asked to join the Casino de Paris, where he found himself performing one night in front of two of the highest ranking Nazi officers, Hoermann Goering and Joseph Goebbels.

In the documentary, De Jesus’ sister, Lisa Cortez, confirms that Vitch not only knew they were in the audience but that he watched them the whole time, and how “that must have taken nerves of steel”.

Then he was sent by order to perform for the Nazi elite and the Gestapo in Germany and Europe’s finest theatres, including La Scala in the heart of Berlin, such was their love of his art and mastery of slapstick.

Vitch never registered as a Jew in official documents, but intriguingly, he did use his real surname, Levkovitch, and was able to reach the pinnacle of the performing industry within Nazi-occupied Europe.

The documentary explores the possibility of the Nazis either not knowing, or turning a blind eye, to the fact that Vitch was a Jew, and the likelihood of him having some sort of high-ranking protector within German circles during the war. But those areas are likely to always remain grey.

What De Jesus and her sisters do know is that at one point their father tried to escape while performing in Sweden, telling authorities he was Jewish and requesting asylum, which was promptly refused, plummeting him into the depths of depression.

Towards the end of the war, Vitch fled to France and was arrested by the French Resistance, but was released in July 1945 upon being cleared of treason.

Vitch has now featured in more than 20 international film festivals since its first release, and has been translated into four languages.

One poignant segment in it shows the three sisters setting up an exhibition of Vitch’s drawings in 2016 in the town of his birth, Skierniewice, which once had a Jewish population of 7,000, most of whom were transferred to the Warsaw Ghetto and later concentration camps.

Of Vitch’s immediate family, only his young niece and his brother survived the war, but tragically they never crossed paths again, and Vitch moved to the other side of the world – Australia – by the early 60s to start a new life.

De Jesus said the recent release of an accompanying book is a welcome follow-up to the film.

“We were fortunate to have all the [stage show] programs and many of the documents that he had, and also 30 original caricatures that he managed to keep,” she said.

“There was a lot of information that couldn’t actually be put into the movie, so we’ve made a beautiful book with more of his caricature drawings and a lot of extra stories and photos.

“The proceeds [from book sales] goes toward keeping the movie [screenings] going around [the world].”

At the Sydney Jewish Museum screening, $5 from each book sold was donated to the museum.

Vitch was also recently screened at the Dendy Cinema in Newtown, and at last year’s Jewish International Film Festival.

In the film, Cortez concludes “I’m still not proud of what Dad chose to do, but I understand . . . who am I to deny him the choice of survival”.

Bujman puts it this way: “Stories about the Holocaust are many times portrayed in terms of heroes and perpetrators, victims and villains. Vitch was none of that. He was an artist that tried to survive in one of history’s darkest times. His humanity and flaws, risks and ambitions, provide an arc of colours in a time period [usually] presented in black and white”.

Infoline
To find out more about the film documentary Vitch, or purchase a copy of the book, visit www.vitchmovie.com.