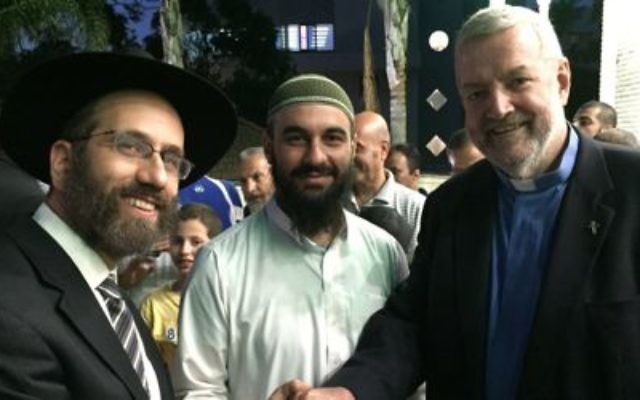 WHILE the perpetrator of Monday’s siege in Sydney was an example of humanity at its worst, several interfaith prayer vigils held this week displayed humanity at its best.

At Sydney’s Lakemba Mosque, Together for Humanity national director Rabbi Zalman Kastel joined Sheikh Wesam Charkawi and Reverend Patrick McInerney on Monday night to pray for the wellbeing of the hostages and call for calm in the community. “It was very meaningful,” Rabbi Kastel told The AJN. “I prayed in Hebrew … they said their prayers and we stood together as a community at a very sad time.”

Rabbi Kastel also commended the #IllRideWithYou social media campaign, in which thousands of non-Muslims expressed their support for Muslim Australians facing a backlash.

“It’s encouraging to see what a generous society we live in here in Australia, in which instead of a situation that could have turned into a very divisive, ongoing saga, people are drawing a line in the sand and saying we stand against bigotry,” he said.

In Canberra, Rabbi Alon Meltzer of the ACT Jewish Community Inc. told an interfaith service that “this form of hate, any form of hate, has no place in our country, or in our world”.

In Melbourne, Rabbis Ralph Genende and Adam Stein joined leaders of the Islamic community and a number of senior politicians at a prayer gathering on Tuesday organised by the Islamic Council of Victoria.

“I wanted to show my support for the Australian Muslim community at a time when I feared some would condemn this entire faith group,” she said.

“I hope and pray that Australians can distinguish between the perpetrator and a faith whose adherents in Australia are strong supporters of the values we share.”