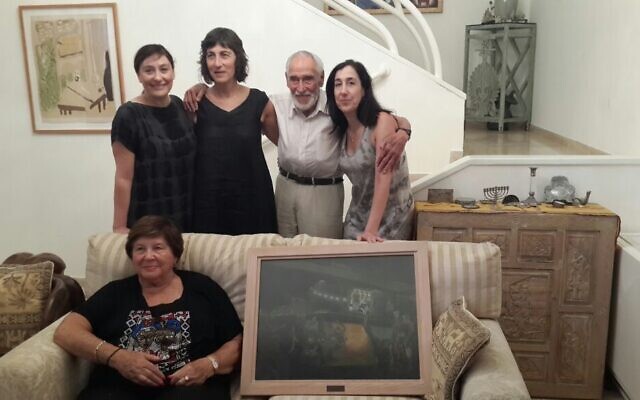 Standing from left: Mimi, Shelley, Harold and Jackie. Seated is Harold’s wife Myra next to the painting.

The family of war artist Edal “Ed” Marcus, a South African volunteer in Israel’s War of Independence, has been reunited with one of his artworks over 70 years after it was painted.

Born in 1926 in South Africa, Marcus volunteered as an airman in the 1948 War and was chosen as one of only two official artists for the fledgling Israeli Air Force. Marcus’ family had not been in possession of any of his artworks until recently.

Marcus’ son-in-law, Peter Tilley, described the events leading up to the family finding the painting as a “miracle”.

“He did several hundred sketches, paintings, drawings, and he was in the habit of giving these things away, so that our family here in Australia had nothing of his work,” Tilley told The AJN.

“So we were all were wondering as a family here, could we at least see one?”

Marcus’ family was reunited with one painting through a series of connections through family friends and acquaintances who were committed to tracking down the artwork.

Their efforts led to Harold Simon, a 96-year-old ex-IAF pilot living in Tel Aviv who was in possession of a painting and was also looking to give it away.

“Within two or three weeks, Shelley, my wife, and my two sisters-in-law Jackie and Mimi, and I were on a plane to Israel… We all thought, there’s someone who’s 96 who wants to give a painting away, who knew Ed Marcus…We were pretty thrilled,” Tilley said. 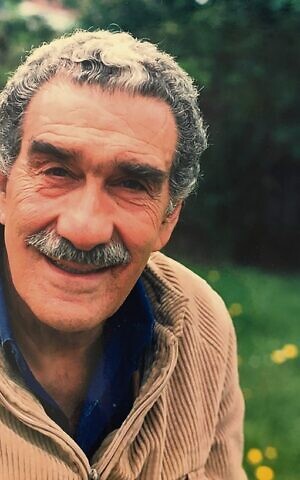 Marcus had given Simon the painting in October 1948, soon after they’d completed a mission delivering supplies to a settlement in the Negev.

“Ed had done the sketch on the ground as it were, and two days later, painted it up. It showed an American DC-3 plane, which is the plane that Harold Simon had been piloting on that occasion and [Ed] had been on as a navigator.

“The painting actually shows the DC-3 has landed at a Moshav, it’s night-time, there are airmen lying on the ground, two guys smoking a cigarette, and others who were helping the local Moshav people unload barrels of oil and supplies.”

Although Marcus and Simon never maintained further contact, Simon “carried the painting with him everywhere” for over 50 years.

Simon, a former South African military pilot arrived in Israel during its War of Independence and is referred to as one of the founders of the Israeli Air Force, and was on the first flight of the IAF on the day Ben Gurion declared the State of Israel, telling the South African Jewish Report, “when we took off from Tel Aviv, it was Palestine, and when we landed, it was Israel. The state was declared during that flight.”

Simon, known as “Smokey Simon” during the 1948 War, passed away in February this year at the age of 101. According to Tilley, Simon was an aviation legend and in celebration of his 100th birthday, took off in a Tiger Moth biplane on an honourary flight.

“The link was re-established thanks to our friends. That’s the miracle of it, that the thing found a home back with the family,” Tilley reflected.

The painting now rotates between the homes of family members in Melbourne, and currently enjoys pride of place in Shelley and Peter Tilley’s living room.

“It’s the only thing we have by him in the family, and it was just an amazing set of circumstances that led to this beautiful thing.”