This is an amazing story of four Jewish sisters born in Melbourne who remain independent and highly functioning in their 90s.

Their parents were Elsa Herman and Sam Kosky.

Sam Kosky arrived in Melbourne from Russia via New York and London in 1913 with siblings. The attraction was family relationships already in Australia as well as developing business contacts in the fur trade – Sam was a furrier.

Family also attracted Elsa Herman’s mother, a widow who arrived in Melbourne from Zurich, Switzerland, with her seven youngest children including Elsa in 1921. (The older 12 of 19 siblings remained in Switzerland.)

Elsa and Sam, whose acquaintance preceded Elsa’s arrival in Australia, were married by Rabbi Danglow in 1923.

The 1920s was a time when fur was a significant fashion choice. Together with other family members including siblings, Sam established Kosky Brothers, which became a leading “Fur Importer, Exporter and Manufacturer”.

A successful business for six decades, it would ensure a very comfortable lifestyle for the sisters.

In the 1920s the Koskys lived in Bailey Crescent, Ripponlea. In 1931 they moved to a larger home in Vadlure Ave, East St Kilda.

While not the overtly Jewish areas they have since become, there was a burgeoning Jewish population in these and surrounding streets.

In an era when the automobile was just beginning to become popular – and even then only for the most wealthy households – these streets in close proximity to public transport (the railway and tram lines) were particularly desirable.

At a time when it was not so common, education and equal opportunity for girls was supported by Elsa and Sam Kosky.

All four daughters were encouraged to believe in themselves, think big, become independent and excel academically; and they were given every opportunity to follow their interests.

Already from their youth they would enjoy the arts, theatre films and gourmet restaurants while in time they would travel extensively both within Australia and, unusually for the immediate post-war era, overseas.

All attended private schools. They initially attended Homebush kindergarten and then a junior primary school which was located in Balaclava Road, East St Kilda, near where Masada hospital now stands. From there each transferred to Firbank in Brighton for their upper primary years.

Claire attended MLC for secondary school, and then proceeded to an Arts degree at Melbourne University majoring in English and Philosophy (1943-1945). Her graduation was reported in the Australian Jewish News – not many Jewish girls graduated from university in those years.

Shirley, Sylvia and Thelma attended Merton Hall for their secondary education. They were among the students evacuated to Marysville in 1942 to keep them “safe” from the threat of Japanese invasion which was feared after the fall of Singapore. They returned to Melbourne in 1943 as the threat dissipated. The evacuation brought to an end their Jewish education which previously involved Hebrew school attendance at Temple Beth Israel.

Conscious of their Jewishness, at both school and university they did not actively mix socially with non-Jewish youth. Interestingly they did not experience antisemitism in their education, workplaces or social lives in the 1940s.

The late 1930s saw increased sub division and housing development in North Caulfield. To more affluent families of the expanding Caulfield Jewish community larger houses on significant plots of land were to be much more attractive than those of Ripponlea and even East St Kilda. This would impact upon establishment of the “Cultural Centre” that was to morph into the Caulfield Hebrew Congregation.

So in 1941 the Koskys moved from Vadlure Ave to a grander home with a tennis court and large entertaining areas in newly developed Cantala Ave, Caulfield North. That address became a popular meeting place for the established Anglo/Jewish youth. There were house parties, tennis parties, 21st birthdays and many more opportunities for the Kosky girls to dress up and socialise with the Caulfield and East St Kilda Jewish youth of the 1940s.

Many such events were advertised in the Jewish press of the time and whether private or under the auspices of the Melbourne and St Kilda congregations, were often fundraising events to support Jewish Welfare to assist Jewish war refugees. These social events contributed to the girls marrying Jewish partners.

Of particular significance in their lives was JYPA (the Jewish Young People’s Association) with its dances and other social occasions that took place in venues varying from the Toorak and St Kilda Shule halls to the Maison de Luxe in Elwood.

Special outfits were sourced from Georges and La Petite in Collins Street in the city.

That middle-class Anglo Jewish lifestyle was in stark contrast to that of many other Jewish families living in Melbourne’s northern suburbs, especially Carlton and Brunswick, at the same period. In addition to the two established synagogues, Rabbi Sanger’s Liberal Congregation also made its mark, but the girls recall that on Yom Kippur they would socialise by moving between the Toorak and St Kilda synagogues.

All four Kosky girls remember the way that many aunts, uncles and cousins in both the Kosky and Herman families provided the Kosky girls a loving family environment.

As a close extended family the Koskys met most Sundays for lunch and afternoons with lavish food based on traditional recipes. To some extent such Sunday gatherings paralleled those in the broader Melbourne community at that time. 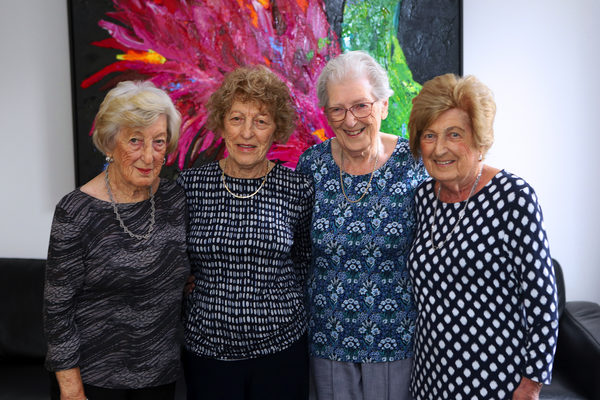 Somewhat remarkably for that era, despite the fact that the family was not by any means overtly Orthodox, all four sisters married traditional Jewish men and all their weddings were held at Toorak Shule.

Shirley married Saul Spielman in September 1948 who she had met at a JYPA social function. Saul was a captain in the Australian Army. He became a prominent member of VAJEX and a successful businessman. They remained in Melbourne and had two children.

Claire married Albert Cymons in March 1949. Albert, who she had met overseas directly after the war, immigrated from Switzerland and was a scientist, businessman and supporter of Maccabi swimming. They too remained in Melbourne but had no children.

Thelma married Neil Same in June 1954 and moved to Perth, where the extended Same family had settled in the 1920s. Neil was a doctor and landowner in Boddington, WA. They had three children and Thelma continued to contribute extensively to the Perth community.

Sylvia married Charles Ungar in December 1954. They had met in London two years earlier when she accompanied Sam on a business trip that also involved meeting many family friends, including Charles, who was from a respected furrier family in London.

Charles immigrated in October 1954 to marry Sylvia and establish their future in Melbourne. He joined the Kosky Brothers and business and family was integral to their success. They remained in Melbourne and had two daughters.

Despite the fact that they had grown up in an era when there was no Jewish day school and attended schools with church affiliations, all the children of the next generation attended Jewish schools – Mt Scopus College in Melbourne and Carmel School in Perth.

The sisters have continued to be fiercely independent and enjoy a zest for life well into their 90s. They are never too old to learn new ways, find new interests and gain knowledge, while they have also stayed connected with younger generations, their grandchildren and great-grandchildren.

Even in their latter years they adapted to change in technology, including computers and smart phones together with such “innovations” as online banking, Zoom and Netflix.

Although Thelma lives in Perth they remain close. Immediately after the borders reopened further to reduction of COVID restrictions they arranged to meet again for the first time after the longest break in personal meeting since the 1950s.

Their reach in Jewish community life, in law, medicine, business, education, defence, environment, engineering, and the arts, is significant. The geographical reach is similarly wide, with family members now living in Melbourne, Sydney, Perth as well as Tel Aviv and Orlando, Florida.

May they continue to live well with dignity and fulfilment and prosper for years to come.

Judy Fetter is Sylvia Ungar’s daughter and executive director of the JCCV.