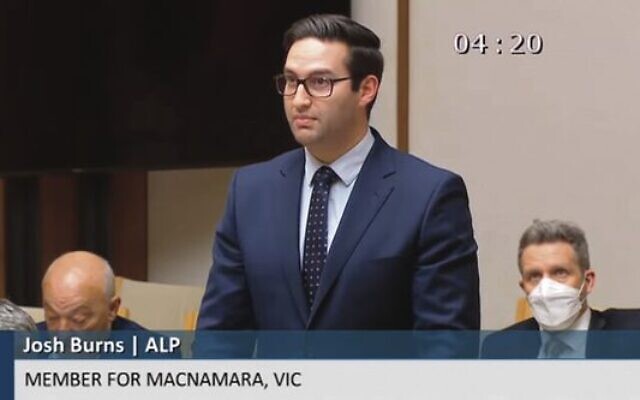 MACNAMARA MP Josh Burns has introduced a motion into Parliament calling for all states and territories to follow the lead of Victoria and NSW and make Holocaust education a mandatory aspect of their school curriculum.

Seven MPs across party lines supported the September 5 motion, which condemned antisemitism in all its forms, in line with the IHRA antisemitism definition. It condemned Holocaust denial and distortion, singling out comparisons of modern-day pandemic restrictions with the Shoah.

Urging a renewed commitment to Holocaust education, the motion pointed out the landmark Gandel Foundation and Deakin University study into Holocaust awareness among Australians this year showed nearly one quarter of Australians have little or no knowledge of the Holocaust.

The motion stated, “Australia has been enriched by the presence of one of the world’s largest populations of Holocaust survivors per capita, and their descendants, in contributing to our vibrant multicultural society.”

Burns paid tribute to his recently deceased grandmother Gerda Cohen who arrived in Australia after leaving Germany a week before the Kristallnacht pogrom.

Spender, MP for Wentworth, who co-sponsored the motion, reflected, “Over the years, I’ve developed deep, personal connections with many families devastated by the Holocaust, many of whom sadly continue to suffer antisemitism today. When I was 20 years old, I had the privilege of visiting Auschwitz with my father. I will never forget that experience.”

In his speech, Dreyfus stated, “I acknowledge that there are other members in this place, on both sides of the chamber, who, like me, owe their lives to the fact that one or more of their family members managed to escape the Nazis and find refuge in Australia. This is only recent history.”

Stevens, MP for Sturt in Adelaide, paid tribute to survivor Andrew Steiner, 89, for whom the Adelaide Holocaust Museum–Steiner Education Centre is named.

“For many decades, [Steiner] has been utterly dedicated to educating school-aged children, in particular about the Holocaust,” Stevens said.