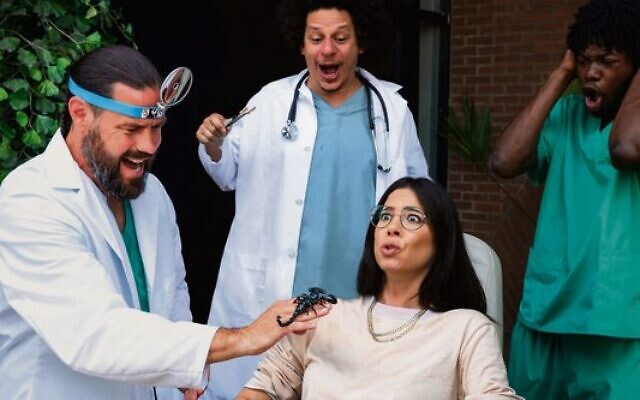 MOST film debuts don’t include licking a taser while dressed as a mime, or having a scorpion crawl on one’s face. But in TV/movie franchise Jackass, that’s par for the course.

“When I first told them, they were like, have you told your therapist?” Wolfson told JTA.

She’s the first woman in the troupe – and the first Jewish member with prominent screen time in a Jackass movie. But Wolfson has been prepared for what she describes as a dream job for years.

In her comedy, Wolfson often brings up being a rebel brought up by a strict family.

She is the daughter of Steven Wolfson, the current district attorney of Clark County, and (retired) Judge Jackie Glass, who in 2008 sentenced O.J. Simpson to prison following his convictions connected to his theft of sports memorabilia. Wolfson has joked that the same woman who used to send her to her room also sent O.J. to jail.

Those parents “had their concerns” about their daughter joining the Jackass team, but they got over them. Wolfson brought her parents to the film’s premiere, and they loved it.

“My Mom is now a Jackass fan, and my Dad said that it kept his attention the whole time,” she said.