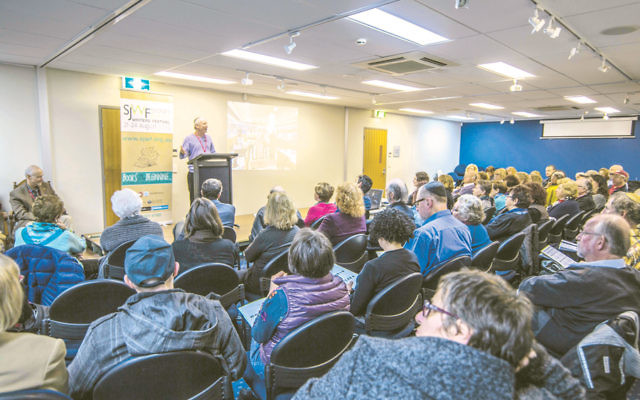 THE Sydney Jewish Writers’ Festival (SJWF) will be held from August 27-28, with 37 authors taking part in panel discussions and lectures during the festival hosted by Waverley Library.

Festival director Michael Misrachi says he is excited about this year’s festival, which follows the success of the 2015 event which attracted more than 650 people.

“We have a great program lined up for this year’s festival, which will build on the success of our sold-out events that we have held this year with Etgar Keret, Simon Sebag Montefiore and Eva Clarke,” explains Misrachi.

“We are continuing with our theme, ‘books are just the beginning’, because the festival covers so many interesting ideas and discussions that go beyond the written word.

“Books are the springboard for a variety of ideas and issues, and the authors taking part in the festival cover a whole range of genres such as fiction, non-fiction and memoirs.”

Among the local authors taking part in the festival are Arnold Zable, who wrote about champion boxer Henry Nissen in The Fighter; Dr Leah Kaminsky whose book We Are All Going to Die was published recently; debut author Natan Better, whose novel Man in the Corner is being published next month; and former AJN journalist Lexi Landsman, whose debut novel The Ties That Bind was released earlier this year.

Friedman, author of the recently released Pumpkinflowers: A Soldier’s Story and the prize-winning 2012 book The Aleppo Codex, is a regular contributor to publications including The New York Times and The Washington Post.

Rabbi Lipman, who served as a member of the Knesset with the Yesh Atid party from 2013-15 and currently holds a senior position with the World Zionist Organisation, has written An ‘American’ MK (2014) and a new book, To Unify a Nation: My  Vision for the Future of Israel.

Gold, co-chair of the Washington Jewish Film Festival and a senior editor at Moment, is the author of Stolen Legacy: Nazi Theft and the Quest for Justice at Krausenstrasse 17/18, Berlin. In the spirit of the Helen Mirren movie Woman In Gold, it is about Gold’s search and long legal battle on behalf of her once prominent German-Jewish family to reclaim the building that had once belonged to them after it was stolen by the Nazis.

New Zealand author Thomas has written two novels set ­during the Holocaust and the ­surrounding historical period titled The Keeper of Secrets (2013) and a sequel published this year, Rachel’s Legacy.

The SJWF is hosted by Waverley Library, with the opening night event at Bondi Pavilion, and the rest of the festival to be held at Bondi Junction.

“On opening night Matti Friedman will be joining Rabbi Dov Lipman for a thought-provoking session about Israel,” says Misrachi.

“Rabbi Lipman brings a special perspective from his time in the Knesset, while Friedman is highly regarded as an international commentator and journalist.

“Dina Gold’s story is in the spirit of the Helen Mirren movie Woman In Gold – it’s a saga about redeeming property that was looted by the Nazis, and which resonates strongly.

“And Julie Thomas, who is not Jewish, has published two beautifully written novels set during the Holocaust that continues to capture the interest of the community.

“All of our international authors have interesting perspectives to discuss at the festival.”
The SJWF has become an important feature on the communal calendar since becoming an annual event in 2013.

“The festival has grown in popularity over the years,” says Misrachi. “The festival reflects the wealth and richness of contemporary Jewish writing. There are a lot of creative Jews writing on issues of Jewish interest.”

The Sydney Jewish Writers’ Festival is from August 27-28. For more information visit www.sjwf.org.au.