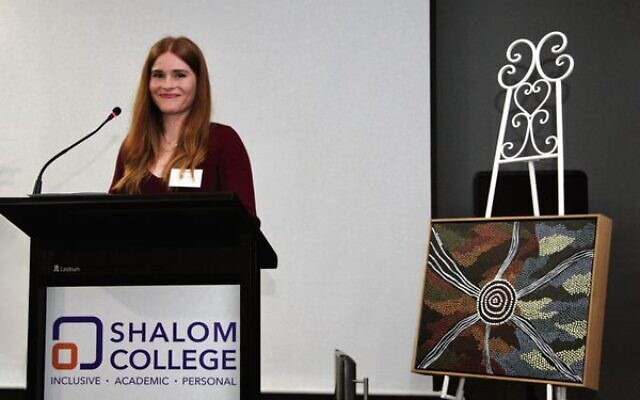 Wootton, 28, is a former Gamarada scholarship recipient who became a trustee this year, and holds degrees from UNSW in science, commercial flying, and aerospace engineering.

Currently working in strategy and planning for Western Sydney Airport, Wootton has set herself the goal of one day becoming the first Aboriginal astronaut for Australia.

A pin drop could have been heard when she told the 60-strong audience of the obstacles she faced on her journey as a leader and role model.

They included running away from her home aged 15, the loss of her father, “struggling with my identity growing up, and being told as a child repeatedly that I was stupid”.

“Organisations such as Shalom College, and Gamarada, were pivotal in my success, and will be pivotal in the success of past, current and future Indigenous leaders,” she said.

The program’s executive director Gina Cohen said of the program, which has produced almost 60 UNSW Indigenous graduates so far, “with each student who graduates, a role model is created, and a ripple effect that empowers others”.

“To our incredible Shalom College team, our trustees, and our donors, thank you for your deep commitment,” she added.

Ilona Lee – who co-founded Shalom Gamarada with Professor Lisa Jackson Pulver – said she felt buoyed to know that in its 16th year, “this program is still going strong”.

Other event highlights included the unveiling of a traditional dot painting by recent Gamarada and UNSW fine arts graduate Taylah Hoskins, to be hung at the entrance to the college, and a Gamarada Awards presentation.

A community service award went to 21-year-old Wiradjuri woman and third year UNSW Bachelor of Arts student Suzie Winkleman, who this year was elected as the leader of UNSW’s Indigenous Student Working Group.

Smith said, “Growing up, I moved around 13 postcodes, which is one of the reasons I’m so grateful to Gamarada.”

The program will welcome six new scholarship recipients in 2022.