REELED INTO A PASSION FOR FILM

I‘ve always loved movies since I was very little – their storytelling power, and particularly the hands-on part of the process of how they are made” senior curator of photographs, film & sound at the Australian War Memorial (AWM), Daniel Eisenberg.

“A still image captures a moment, but what a moving image does is different – it can transport you.

“You can see what the tracks of a tank look like as they move across the Western Front, or the way soldiers hang their shoulders while carrying someone on a stretcher, or the recoil of artillery firing.

“Film footage about war makes it real and emotive, and it connects and places people into another world – a place that hopefully most of us never have to be.

“When official WWI Australian war correspondent and historian Charles Bean had the vision to establish the AWM, he realised you had to have access to not just photos, but to the moving image, because that’s what speaks to the populace.”

Before joining the AWM a decade ago as a curator and researcher, Eisenberg studied film theory at the University of Sydney, and completed an honours degree in film, before lecturing at the Australian National University in Canberra.

He feels very lucky to have begun working at the AWM in 2012, when it was preparing programs and exhibitions for the Centenary of the First World War.

“We did a lot of deep research into the film collection … and what I was most interested in were the madmen behind the wooden box cameras, capturing footage of Australians in action in the Great War, so that it could be seen back home.”

As a senior curator, Eisenberg describes having that remarkable amount of material at his fingertips, as very exciting and rewarding, but also daunting – “and that would be an understatement”.

“Our curatorial team is very fortunate, as our film collection goes back to the Boer War, right up to items added as recently as weeks ago – and we’re actively collecting to this day,” Eisenberg said. 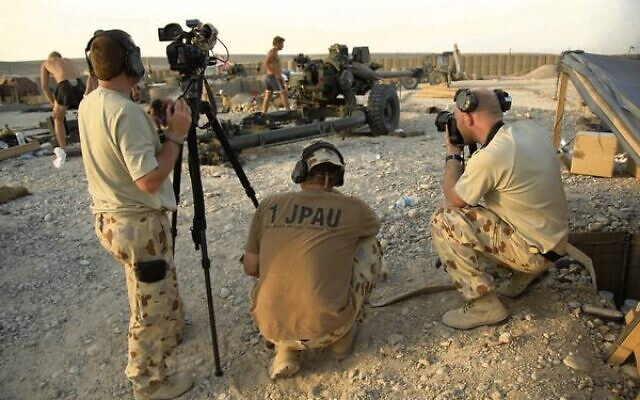 The AWM’s collection ranges from film and nitrate glass plate negatives shot by Frank Hurley, George Wilkins and Herbert Baldwin in WWI –which sit in cold storage – up to the flexi negatives shot in WWII, people’s home movies shot on 8mm film, film and colour photography from the Vietnam War era, and audio-visual material featuring Diggers in more recent conflicts like Iraq and Afghanistan, and peacekeeping operations like East Timor.

“We also actively commission photographers, cinematographers, oral historians and composers to create material that gets displayed, and work with the Department of Defence, and many different organisations.

“Amongst all of that, germinated the idea for this exhibition – that there’s a need to bring all these threads together.”

Adding complexity to those threads is what Eisenberg calls “the struggle of the medium [of film] – forever caught between telling a good story, and telling the truth, and the first sparks in that struggle were present back in the First World War imagery”.

“I make no qualms that large amounts of our collection were shot as propaganda and, in fact, the Department of Information that was set up at the outbreak of the Second World War was a propaganda unit, to encourage support for the war effort.

“At times, the footage aimed to be a historical record of events as they happened, and for every iconic clip that was staged, you could say okay, but it was staged with members of that battalion who were there.”

A clear example Eisenberg gives of a completely staged, yet iconic, piece of moving image footage – “that the media always request from us when Anzac Day comes up” – is supposedly of Australians landing at Gallipoli on April 25, 1915.

“But in actual fact, it is from a feature film made at the time, and the beach being stormed is Tamarama [in Sydney], but the footage is in black and white, and it’s grainy, so it looks like the real thing.

“So, the moving image tends to get disconnected from its archival roots over time, and that’s one of the messages in this exhibition – how we, as curators, are trying to re-anchor the moving image, regardless of what it was shot for, back to where it came from.”

Commencing in Townsville, before heading to Sydney and then Launceston, Action! Film & War includes 250 items, ranging from camera equipment and audio-visual clips, to war cinematographers’ diaries.

Four years in the making, it was led by Eisenberg, who pulled together – with fellow AWM curator Jennifer Selby – a team of experts from across the AWM’s collecting areas, to dive in deeper.

“We knew we wanted to take people on a journey through the history of really iconic figures in Australian war cinematography, who put themselves in constant danger in war zones,” Eisenberg said.

“We’re really lucky that we hold a surprising amount of material relating to them, and also have had items on loan to us especially for the exhibition.

“And we’ve tried to push the ‘first person’ voice throughout, by including their quotes and personal reflections.”

Among the featured figures is Captain Frank Hurley, who in the Great War was sent to film and photograph Diggers in battles initially in France and Belgium, before being sent to the Middle East, where he witnessed the Australian Light Horse in the Battle of Jericho.

Hurley also served again in the Middle East as an official AIF photographer and filmmaker in WWII.

Few may know it, but Australia’s first Oscar-winning film, Kokoda Front Line!, won Best Documentary in 1943 as a feature-length Cinesound newsreel, shot almost exclusively by Damien Parer – and that actual Academy Award trophy, loaned by the National Film and Sound Archives of Australia, can be seen at the exhibition.

Parer – who was prepared to put himself in harm’s way to capture footage – also worked in the Middle East theatre of WWII, and after resigning from the Department of Information towards the end of that war to work for America’s Paramount News, was killed by Japanese fire, with camera in hand, in Palau.

Exhibition visitors will be able to see Parer’s kitbag, slouch hat and ID card, and also the Newman Sinclair cine-camera that he shot some of Kokoda Front Line! with. 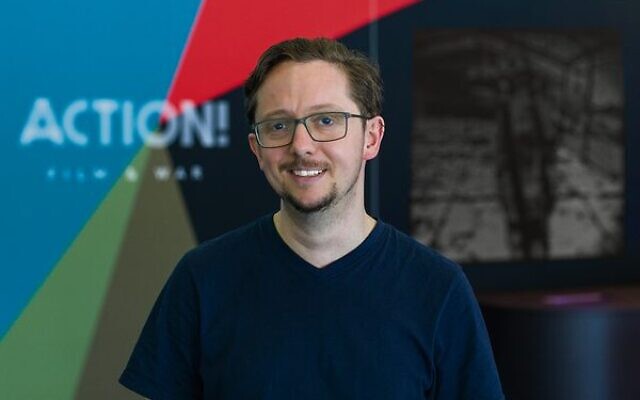 Also tragically killed in action, in different eras, were two other Australian cameramen included in the exhibition.

Neil Davis, who extensively covered Australians fighting in the Vietnam War, was killed when working as a photojournalist in Bangkok in 1985.

His work diaries feature in the exhibition, and several of his personal items.

Paul Moran was killed by an exploding car bomb in 2003 during the Iraq war while working for the ABC, and the camera he was using on the day he died is in the exhibition.

Items, and work, personally donated by the ADF’s first female war cinematographer, Robyn White, will also be on display.

A range of camera equipment used by war cinematographers in different eras will be seen up close, ranging from a 15kg wooden hand-winding camera to a modern helmet-attached Go Pro device.

The remainder of the exhibition’s focus aims to explore and explain where Australian wartime films came from, and the various purposes they were used for – both by troops serving overseas, and back at the home front.

In the feature films section, visitors can view the original script for Peter Weir’s Gallipoli, costumes from Jirga and The Sapphires, and props and concept art from Kokoda.

There’s even a part about the long history of Australian soldiers and veterans involved in film production, as stunt people, weapons trainers, extras and occasionally actors.

This trend continues today, for example, through veteran Shaun Barry’s organisation Extra Specialists, which works with Marvel’s studios in Queensland and others, to provide film work for ex-servicemen as a form of post-service therapy. Barry has lent a range of items for the exhibition. 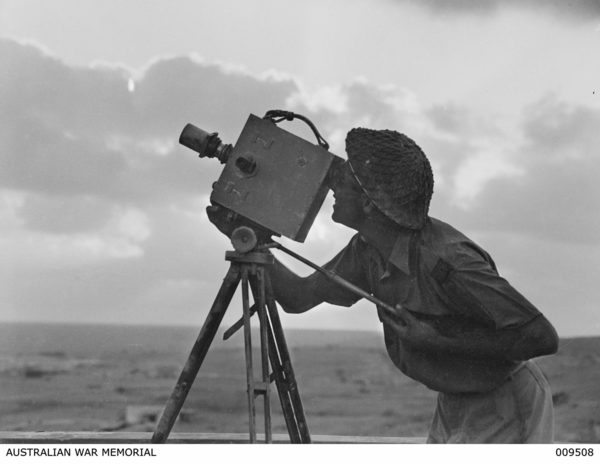 Because the exhibition is a touring one, it is limited to how much moving image footage it can include, so QR codes will be available to visitors to offer them links to iconic wartime clips to watch at their own pace.

Some film footage does physically feature in the exhibition though, and Eisenberg has his favourites.

“There’s a phenomenal 30-minute documentary the memorial commissioned Neale Maude to make, called Behind the Camera, that has interviews with 11 Australian war cinematographers who have worked around the world over the past 40 years,” Eisenberg said.

“And my overall favourite centres on an amazing hand-made animation by Harry Julius, from the First World War, based on a Norman Lindsay poster – a recruiting cartoon – of the monster of war, wearing his helmet, stomping through the Australian landscape, saying you need to sign up now.

“What we did was commission Australian composer Max Lyandvert to score a contemporary soundtrack to go with it, as it would have been silent originally, and only accompanied live at cinemas.

“Max created an evocative and also quite elegiac piece of music, making you think about the human cost of war, which is certainly not part of its original propaganda intentions.

“But it’s a wonderful piece that I’m quite fond of.”

As for the future of the moving image in wartime coverage in the face of rapidly changing technology and the social media age, Eisenberg said, “The term you’ll hear archivists throw around now is ‘digital deluge’.

“Everyone’s got a camera on their phone, so everyone’s capturing footage and photos, and it is infinitely shareable, and becomes all about immediacy.

“So one of the challenging things for us [curators] in this digital age are copyright and ownership issues.

“We get offered that kind of material, and someone might say it is amazing footage, but then I’d say, but who shot it?

“And I’m not going to even go into things like deep fakes and digital manipulation that’s going on out there – that’s a whole other scary world.

“So, for curators, the objective of maintaining the historic record, and audio-visual authenticity, is just so important.”