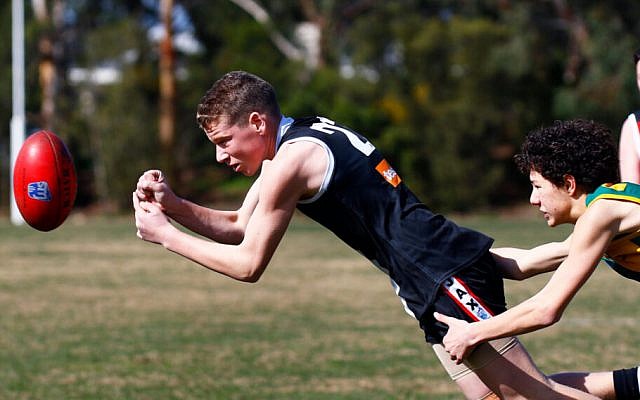 Gabe Jotkowitz gets a handball away for AJAX in their U15 boys' semi-final win against Oakleigh at DW Lucas Oval, East Malvern on August 25. Photo: Peter Haskin

IT’S the end of August and that can only mean one thing – finals fever is in the air for AJAX Footy Club’s junior and men’s teams. Four junior teams will play in grand finals, and the men’s Jackas team have qualified for the upcoming VAFA Premier C finals series for the first time in eight years.

IN an impressive finish to the 2019 season, nine AJAX teams from U11s to U16s played semi-finals footy on August 25, with four teams posting terrific wins to advance to SMJFL grand finals to be played over the next two weekends.
Most players in the club’s U15 Jets team made their finals debuts, but were certainly not fazed by the occasion.
After a 10-point deficit early against the Oakleigh Dragons, the Jets lifted their intensity in the second and third quarters to edge their way back into the contest.
Coach Ryan Klooger told The AJN he noticed the mood among his players become full of positivity.
“Everyone had some sort of belief that this game could turn,” he said.
“To their credit they kept fighting, and are now through to a grand final.”
They finished 9.12 (66) to 8.4 (52) victors, with Zak Jacobs booting four goals, and Gabe Jotkowitz three. 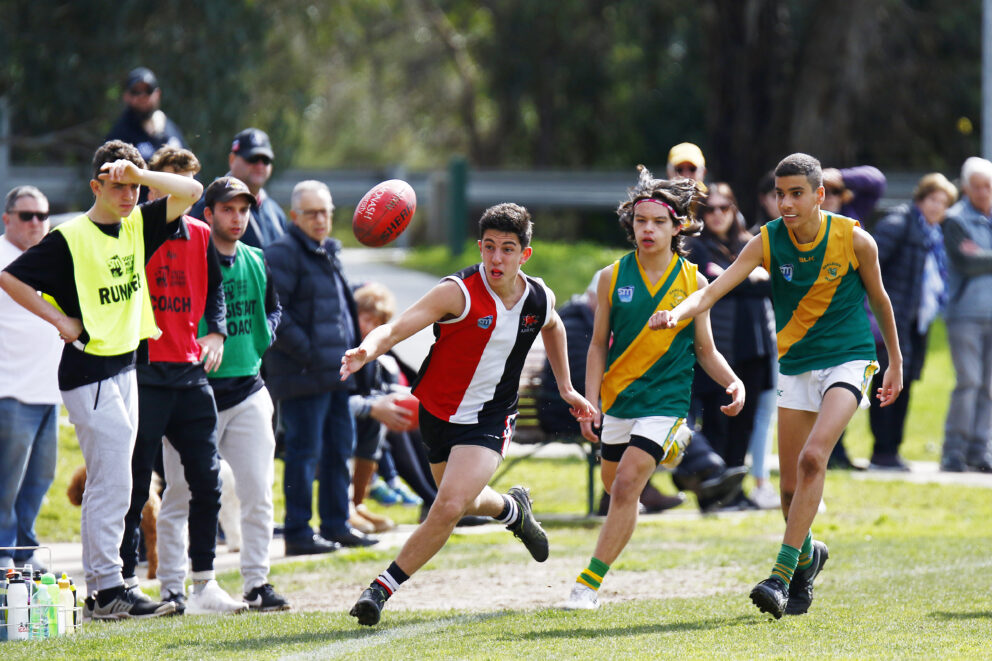 AJAX U15 Jets player Saul Goldberg leads a chase for the ball in the semi-final against Oakleigh. Photo: Peter Haskin

Also qualifying for grand finals were the AJAX U11 Stars who beat St Bedes Mentone 6.3 (39) to 5.4 (34), with Jonty Israel top-scoring with three goals.
The U12 Comets are grand final-bound after making a statement in their semi against East Malvern, winning 15.13 (103) to nil. Four goals were scored by Jethro Gunn, and two each by Itai Alford, Nicholas Levy and Ethan Lakman.
Earning a spot in a decider too, are the U14 Comets, who trounced St Peters 9.6 (60) to 3.4 (20). Joshua Nirens kicked three goals, and Tye Marabel-Whitburn scored two.
The AJAX U12 Jets, U13 Jets, U14 Jets, U16 Jets and U16 girls’ sides all competed well in the semis, and were brave in defeat.
AJAX Junior FC president Jason Wrobel said the club is thrilled with having so many teams experiencing finals series action.
“The junior club has had a fantastic year with 22 teams playing – three more than last year – and over 700 players registered, including in the Auskick program,” Wrobel said.
“We’re also proud to have fielded three girls’ teams in 2019, after introducing a girls’ team in 2018.” 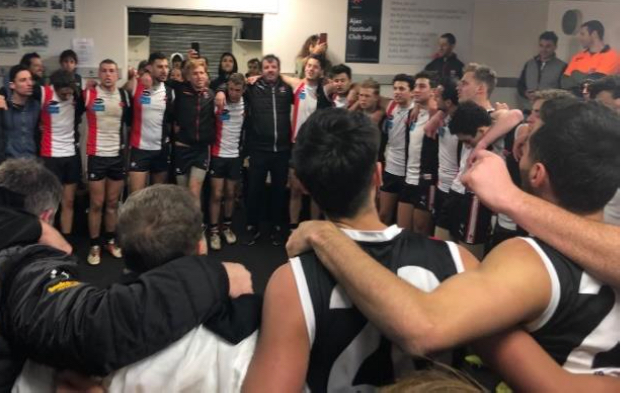 The Jackas celebrate their round 17 win against Hampton Rovers.

THE Jackas are guaranteed to make the finals for the first time since 2011, after securing an important VAFA Premier C round 17 win against the Hampton Rovers last Saturday at Gary Smorgon Oval.
In very windy conditions, AJAX battled bravely in a low-scoring affair to triumph 6.9 (45) to 5.7 (37) to cement third place on the ladder with just one round remaining.
Kicking into the breeze in the first quarter, the Jackas were scoreless at quarter time, but their defensive effort was willing.
Richie Simon put in a Best On Ground performance, taking 11 marks and making 15 kicks for the game, and was well-supported by his backline teammates, particularly Daniel Janover-Rocha, Jeremy Forbes and Justin Berkowitz, while Benji Krongold led the possessions count with 29.
A great Charlie Hamilton snap got AJAX off to the attacking start they needed in the third quarter, and it was followed shortly by a bone-crunching tackle by skipper Nick Lewis on his Hampton counterpart.
AJAX found themselves eight points behind just after the start of the final quarter, but with a breeze at their backs, responded well with a goal from a set shot by Dov Paltiel.
Toby Sheezel made four important tackles in the last 20 minutes, and despite dealing with a niggling knee injury all game, Jake Lew kicked a decisive goal from 50 metres out to seal the deal.
After starting the year on the back foot with a string of losses, the Jackas’ win over Hampton was their sixth straight, and their ninth in the last 11 rounds.
They finish the regular season this Saturday afternoon in an away match versus Ormond, and will then start preparing for their September 7 semi-final.