Last year, 27-year-old Jarod Rhine-Davis, who graduated from Carmel School in Perth and now lives in Melbourne, won the B’nai B’rith and JNF Jewish Changemaker Award for Leadership for his work in repairing relationships between the Australian LGBT+ and Jewish communities, and for facilitating cross-community collaboration opportunities.

When given the opportunity to speak with someone who has inspired him, he chose Rabbi Steven Philp, a LGBT+ rabbi who has recently taken up a position as the Associate Rabbi at Mishkan Chicago, an independent, unaffiliated, spiritual community which, according to Rabbi Philp, was “founded on a dynamic and reverently irreverent Judaism, open to all people and radically inclusive”. 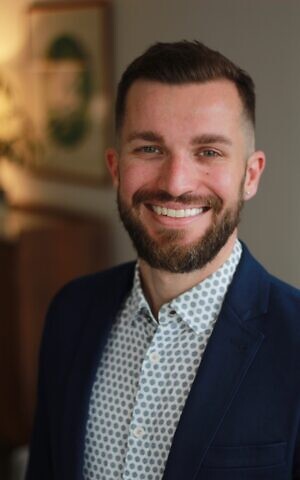 Prior to his appointment at Mishkan, Rabbi Philp was the rabbinic fellow at Park Avenue Synagogue, one of the flagship synagogues of the conservative moment in the USA.

For Rhine-Davis, Rabbi Philp was an obvious choice to interview. They’ve never met face-to-face, but Rabbi Philp’s story drew Rhine-Davis in from the moment he heard it – Rabbi Philp is a LGBT+ person who chose to become a rabbi.

As Rhine-Davis said to Rabbi Philp in their conversation as part of The Australian Jewish News‘ Inspired series: “It’s a really important story to tell because not only have you had the experience of being LGBT+ within the framework of Judaism, but you have also chosen to be somewhat of a custodian of our tradition to future generations, to our fellow humans.”

Without giving too much away – you’ll have to watch the video for the full story – Rabbi Philp grew up in a Christian household and converted to Judaism later in life.

It’s one of the reasons Rhine-Davis chose to speak to Rabbi Philp, as someone who has experienced being LGBT+ outside of the Jewish framework and then within it.

When it comes to Judaism, Rabbi Philp said that all of us make a choice, whether you’re born into it or not. “Judaism is not a community of identity only. It’s a community of actively living out our identities. One doesn’t just say ‘I believe, therefore I’m a Jew’. A Jew is somebody who does, whether that’s practising the mitzvot and living a very traditionally observant life, or it’s that our Judaism is actively lived through our politics … or the food we eat,” he said. “I think particularly for people who are in the LGBT+ community, it’s a question we often have to ask ourselves in the context of Judaism.”

Rabbi Philp says it is empowering to see that Judaism is an evolving, interpretive tradition. “We have replaced sacrifice with prayer. We’ve replaced the Temple with the table and the synagogue,” he said. “We have radically changed the way that we do Judaism over thousands of years. We have always been a tradition that has evolved and adapted as we understand new things about the world and new things about ourselves.”

For Rabbi Philp, this is what it boils down to and it’s a concept that marries so beautifully with the work that Rhine-Davis is doing here in Australia. Everyone, no matter how you practise Judaism – what observances and traditions you follow or how you identify yourself – is a link in the chain of tradition.

To nominate someone for the B’nai B’rith and JNF Jewish Changemaker Awards 2021, visit australianjewishnews.com/changemakers/