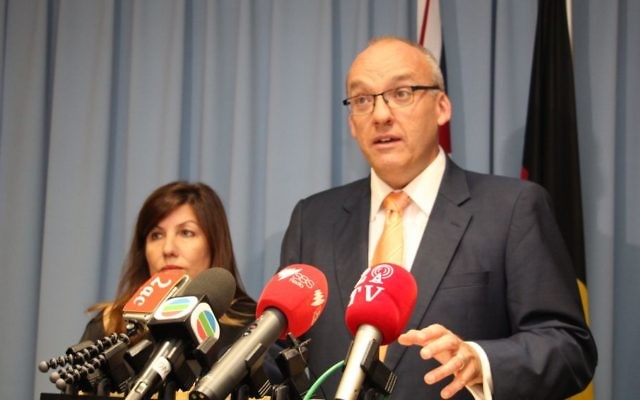 ONLY a week after Gladys Berejiklian held her first press conference with the multicultural media as NSW Premier, Opposition leader Luke Foley held his own, challenging her to “rule out” a Liberal–One Nation preference deal ahead of the next state election.

Foley said late last month he “would rather lose the next election than do a deal with Pauline Hanson”.

“Because let me tell you the consequences of the Liberal–One Nation preference deal in Western Australia … three One Nation members in the Upper House – now with a share in the balance of power over what happens in that state,” Foley said.

“Imagine if that was to occur here? We have to say to Ms Berejiklian and the Liberal Party in NSW – don’t go there. Rule out any deals with Hanson.

“Only then can the Chinese, Korean, Jewish, Arabic communities – all of our diverse ethnic communities – know in NSW that the toxic policies of Pauline Hanson, [and] her racism, won’t be aided and abetted by the major parties.”

Turning to the topic of Section 20D, Foley said he made a commitment the week before at a dinner at The Great Synagogue attended by “leaders of this state’s Jewish community, that we stand for overhauling the provisions of the NSW Anti-Discrimination Act to ensure there are stronger laws against incitement to violence and serious racial vilification”.

“I also [recently] moved a Private Member’s Bill … but we’ve been saying this for years.

“The former NSW attorney-general [Gabrielle Upton] did nothing to resolve this matter.

“We are urging the new Attorney-General Mark Speakman to move swiftly.”

Foley then opted to enter the federal discussion about Section 18C of the Racial Discrimination Act, despite it not being a state issue.

He urged the Premier to join her predecessors, Barry O’Farrell and Mike Baird, “in speaking out [as leaders] against changes to hate speech laws at the federal level”.

When asked about Section 18C at her multicultural media press conference on March 21, Premier Berejiklian said “I have no issue with the status quo, I think it serves us well – that is my personal position.”

On Section 20D, she said “we don’t have any concrete plans at this stage but we do appreciate the concerns raised by your community and others about that.”