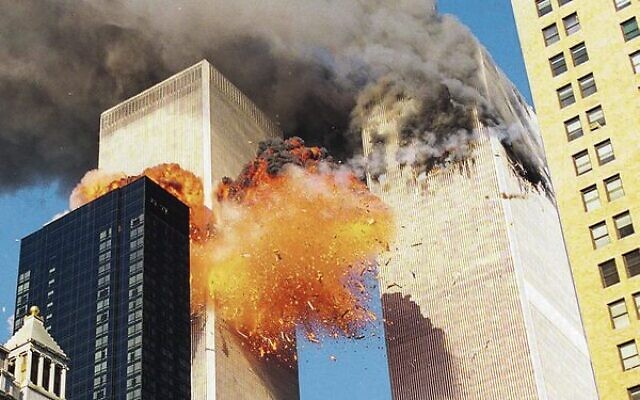 ALEX Ryvchin was a first-year law student at UNSW on September 11, 2001. The Executive Council of Australian Jewry co-CEO recalled “the media in its bewilderment scrambling for facts, trying to rationalise the striking of the first tower. I then watched live as the second plane destroyed the South Tower and with it, all doubt”.

“The world was greatly altered after the attacks. The way we travel, the way we perceive threats and evaluate risk. Many felt uneasy in public places,” he said.

“After 9/11 came Bali, Madrid, then London, then the menace of ISIS, all of which heightened the sense that an attack on our shores was just a matter of time. Jewish communities were targeted in devastating attacks – Brussels, Paris, Copenhagen, Toulouse.

“Some of us in our naivete felt that the world would now be awake to the sorts of threats that Israel faced daily, which would in turn engender a sense of empathy and solidarity with Israel and the Jewish people.

“Instead, the attacks spawned an entire body of hack analysis and opinion, from European foreign ministers to White House insiders and academics, suggesting that the American misfortune was the price paid for support for Israel in the first place. It also revealed the depth of irrationalism and human susceptibility to the conspiracy theory.”

Zionist Federation of Australia president Jeremy Leibler said 9/11, coming a year after the start of the Second Intifada, “made the West realise what Israelis had learned a year earlier; the objective of Islamist terrorism is not to obtain a specific goal like Palestinian independence but to spread terror amongst its enemies for the sake of doing so”.

Leibler said that after 20 years in which the US and its allies maintained troops in Afghanistan, “we have in recent weeks witnessed a return to power of extremists amid an ignominious US withdrawal”.

“While the US remains Israel’s strongest ally, it also remains vitally important that Israel is able to defend itself as and when necessary, without recourse to American intervention.”

This month also marks the first anniversary of the signing of the Abraham Accords, noted Leibler.

“In the wake of Afghanistan, this year’s September 11 anniversary will be a poignant reminder of what has gone wrong, but the September 15 anniversary of the Accords should remind us of a brighter future.”

Australia/Israel & Jewish Affairs Council executive director Colin Rubenstein described 9/11 as “a monumental failure for US intelligence which had allowed terrorist cells to train for the hijackings in American pilot-training programs undetected”.

“Jews and Israelis were the canaries in the coal mine. Islamists do not attack Western countries for what they do, but who they are and the pluralistic values they represent,” said Rubenstein.

“The world learned that lesson after 2001 – but today, too many seem determined to forget it. While the war on terror has involved many serious tactical and strategic errors, the urgent need to confront, contain and control violent Islamist extremism will not go away just because we pretend it does not exist.

“Violent Islamist forces have been hugely boosted by the Taliban victory in Afghanistan, and the apparent theme of dedicated jihadists successfully defeating a global superpower.”

Federal Association of Jewish Ex-Servicemen and Women president Keith Shilkin observed that the US exit from Afghanistan “reminds us all of the threat Australia and the world face today”.

Paying tribute to Private Gregory Sher, an Australian Jewish soldier who was among 41 Diggers who lost their lives during Australia’s campaign in Afghanistan in the years after 9/11, Shilkin said Sher was among 341 Jewish Australians who have died for their country.

“As with all those who served, their commitment and willingness to sacrifice was borne of the deep desire to uphold our Australian way of life, and to be able to live in freedom.”