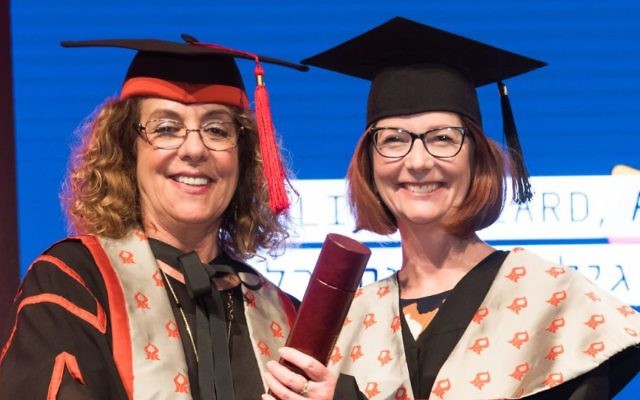 FORMER Australian prime ministers Julia Gillard and Tony Abbott are both in Israel this week receiving honorary doctorates from universities.

Gillard, who was nearly rolled as prime minister by Bob Carr when she stood by Israel at the United Nations, received her honorary doctorate on Tuesday from the Ben-Gurion University.

“I can think of no more fitting tribute to David Ben-Gurion (the founder of the State of Israel) than to have this place of learning and research bear his name,” Gillard said.

She said Ben-Gurion would be delighted that, in his honour, the university nurtures and grows a courageous new generation for a new age.

“A generation schooled in diversity and acceptance, through studying alongside students and faculty from so many countries and cultures, including Bedouin women and Iranian medical educators.

“A generation of global citizens who understand the Negev, Israel and our globalised world. A generation of which Ben-Gurion would have been proud,” Gillard said.

She said that Ben-Gurion had one overriding attribute that defined him, his sense of purpose.

Gillard then went on to offer some reflections on the importance of having a sense of purpose to take life’s opportunities and meet its challenges.

“The Israelis, in their wisdom, are giving me an honorary doctorate,” Abbott said before he went to Israel.

“And I’ll also have the chance to discuss the wider security situation and I’m also hoping to visit some Australian troops who are visiting this part of the world.”