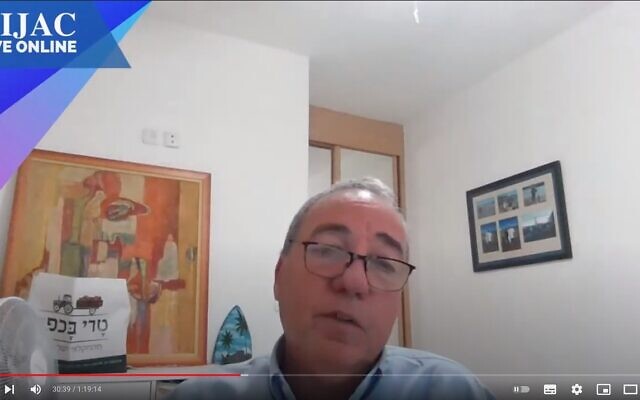 Ambassador Yuval Rotem, former Israeli Ambassador to Australia and former Director General of Israel’s Ministry of Foreign Affairs, was the latest webinar guest for the Australia/Israel & Jewish Affairs Council (AIJAC), speaking on ‘2022 – Year of difficulty or opportunity for Israel’.

Ambassador Rotem was scathing about reports on what a renewed nuclear deal with Iran would entail.

“America is not going to live up to what they have claimed the deal is going to be. The deal is not going to be better because it’s… not going to be longer and stronger as they have promised. My view is that the deal… will be rather shorter and weaker and… it’s almost a complete capitulation to the demands from Iran to the extent that Iran can shorten its breakout time to a mere handful of months,” he stated.

He added: “Iran I think may… discontinue enrichment according to the deal but it is less important in 2022 since they were able to gain the knowledge and to procure the equipment to enrich the uranium at the higher speed for almost non-existent concessions from Iran. American negotiators are willing to give everything, unfreezing billions of dollars from the banking accounts, exploring exporting oil and energy and elimination of sanctions and no engagement at all with the other stages of Iranian military nuclear capabilities.”

He pointed out that a member of the US negotiating team had even resigned, citing “exaggerated American concessions”, adding that the return of the deal will mean that “within a few years all the restrictions… will expire beginning next year and Iran will have no restriction whatsoever in the near future to produce nuclear capabilities.” He said that, once this happened, “there will be no more stability in the region,” as was the case after the original deal was signed in 2015.

If the deal does go ahead, he said, Israel must demand there are full inspections, and will have a few short years to decide what it does next, whether that be seeking new alignments such as the Abraham Accords, or giving itself future options.

Rotem also said that Israel has a dilemma in relation to the Ukraine war. It has Russia in control of Syria, on its northern border, and there are large Jewish communities in Russia and Ukraine, but the US is its closest ally, which it relies on for so much. He noted that Israel had offered to try to help negotiate an outcome, and as a small country that is not part of a bloc, could be well placed to do so, but should only proceed if both the US and Russia were happy for it to be involved in that way.

He sees the war as the most important strategic historical event since the Cold War ended, and warned it could mean the end of the current world order, lead to an arms race – especially among smaller countries that would now realise they were on their own if a major power attacked them – and make international cooperation more difficult.

Despite his criticism of US behaviour over the JCPOA Iran nuclear deal, he said US engagement in the Middle East is critical for stability there. Otherwise, he warned, many countries may make miscalculations in relation to other countries there. He added that if the US is strong, then the region is strong.

Ambassador Rotem also supported direct flights between Israel and Australia as feasible, and said they would further strengthen relations, and said he saw scope to significantly increase the billion dollar annual trade between the two nations.