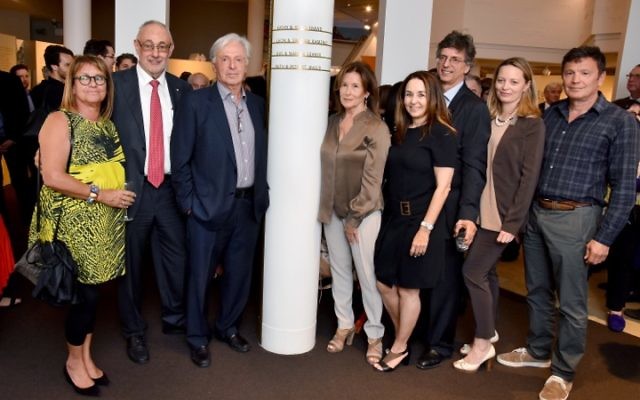 From left: Nanna and Gus Lehrer, Bob and Ruth Magid, Kathy and Greg Shand, Simona and Leon Kamenev standing next to a pillar at the SJM that now bears their names. Photo: Noel Kessel

THE generosity of four Sydney families is helping ensure the future of the Sydney Jewish Museum (SJM).

Greg and Kathy Shand approached the SJM’s president Gus Lehrer and pledged $5 million if the museum could find families to match the donation.

Lehrer, with his wife Nanna, Bob and Ruth Magid and Leon and Simona Kamenev quickly came to the party, and the three couples agreed to donate a combined total of $5 million.

At a special event on Monday night, honouring the four families, Greg Shand said the museum has a special place in the community and it must be supported.

“It has come a long way since it was established in 1992 by the late John Saunders,” Shand said.

“It is expected that 27,000 school-aged kids will come through this year.

“All these children are learning about our heritage, our history, including the Holocaust and what it means to be Jewish.

“The museum really educates the broader community, which is so vital for all of us.”

It was revealed that the museum runs at a deficit of $2 million each year, and that an endowment fund of $40 million is required to make the museum self-sufficient.

The money will go into that fund, which will grow to $25 million with the donations from these four families.

“We are well on the way, and who knows, with a few more grants and some more new names on that pillar, it is completely realistic to expect that the museum will be financially secure for the first time.”

Shand said that he and his wife wanted to donate to the museum because they are “lucky members of a very lucky generation”, and that it goes hand-in-hand with a responsibility to support and give back to the community.

Sydney Jewish Museum treasurer Gavin Solsky said that the donations are putting the museum on a path to financial sustainability and independence.

“Museums do not have inherently viable business models with sustainable and large revenue streams like many of our other communal organisations.

“Without community support from our members and donors, support from the JCA and income from our endowment funds, the museum could not continue.”

Solsky said the museum’s goal is to build the size of its endowment fund capital base to the level where the income from the endowment can meet its annual operating deficit. “A few years ago this seemed like a dream but we have made material progress toward this objective.”