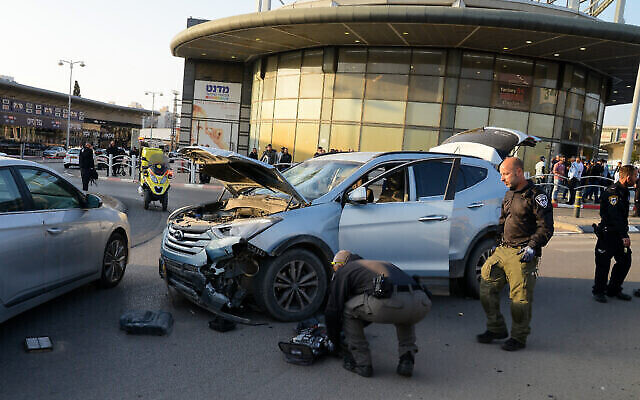 The scene of the deadly terror attack outside the BIG shopping center in Beersheba, southern Israel, March 22, 2022. Photo: Flash90

THE Zionist Federation of Australia has condemned the terrorist attack in Hadera overnight.

ZFA President Jeremy Leibler said, “The Australian Jewish community stands with the people of Israel and joins in their mourning. We condemn utterly not just these attacks but the barbarous ideology that spawns them.

“The contrast between hope and hate couldn’t be greater. Foreign ministers from across the region are gathered in Israel to discuss a shared future, while these terrorists are inciting violence and trying to recreate a murderous past.”

The Hadera attack comes after four Israelis were killed last Tuesday in a terrorist attack carried out by an Arab Israeli man in Beersheba.

According to police, the assailant stabbed a woman to death at a gas station before ramming a cyclist with his car and then stabbing several people at a shopping centre.

Among the victims are two mothers of three and a rabbi with four children.

Describing a video of the attacks as “highly distressing”, Executive Council of Australian Jewry co-CEO Alex Ryvchin said, “We must see the savagery behind the headlines. The frenzy and bloodlust with which the killer hacks at one victim lays bare the truth of Islamist terrorism and antisemitism.

“It shows us the nature of the enemy we face. We must be strong and united in response to this evil. We join with the nation of Israel in sorrow.”

Leibler said, “Once again, Israel is in mourning because of an act of murderous hatred perpetrated against innocent civilians.

“As ever, we stand united with Israel against terrorism.”

Australia/Israel & Jewish Affairs Council (AIJAC) executive director Colin Rubenstein stated his organisation was “shocked and saddened by the murderous stabbing attack … another horrifying reminder of the terrorist threat that Israel constantly faces and its unquestionable need for security measures to minimise this ongoing threat.”

Anti-Defamation Commission chairman Dvir Abramovich, who has relatives in Beersheba, said this “heinous act is directly related to the disturbing climate of escalating demonisation of Israel promoted by the Palestinian media and the Palestinian authority”.