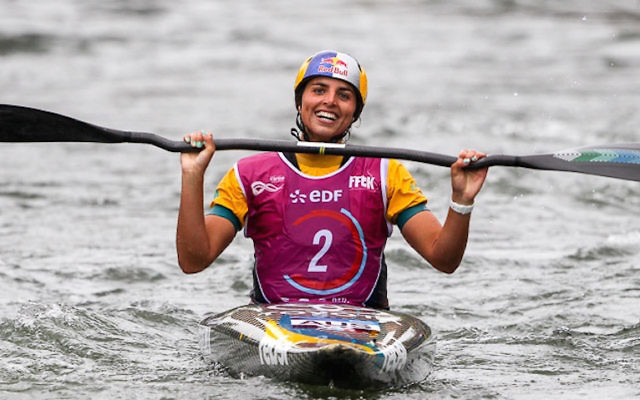 SYDNEY’S Jessica Fox turned disappointment into triumph at the ICF Canoe Slalom World Championships in France last weekend, bouncing back from the shock of missing out on a medal in the women’s C1 (single canoe) by winning the K1 (single kayak) final by a massive 4.62 seconds.

Having won the last three women’s C1 world titles, Fox was left gutted on Saturday after accruing six seconds in penalties to finish sixth in the C1 final, won by Britain’s Mallory Franklin.

“I never thought I was unbeatable, I knew these Worlds would be hard.”

But just 24 hours later the two-time Olympic Games medallist, having qualified for the women’s K1 final in 10th place, threw all caution to the wind to post a lightning quick time of 97.14 seconds, which proved unbeatable.

Remarkably, she did not make a single error on the tricky Pau course during her impressive display of power paddling.

“Yesterday [the C1 final] was really disappointing, exhausting and draining, and I knew I had to come back today with a fresh start.

“I’m really proud of that race because I feel like I attacked it the way I wanted to.”

“After the [Rio] Olympics, I was really pleased and proud to win the bronze, but I was a little bit frustrated.

“So to come back this year to Pau, to deliver a really sweet run after some disappointments here in the past few years, it’s really awesome. I’m just so happy right now.”

In the teams events, Jessica teamed up with her younger sister Noemie and also Ros Lawrence to win silver in the women’s C1, while Jessica joined forces with Lawrence and Kate Eckhardt to win bronze in the women’s K1.

Noemie, who also competed in the C1 individual event and made the semi-finals, said the team ­executed well when it counted most.

“We held it together and we were clean, which was very important,” Noemie, 19, said.

“It was just so much fun to be out there.”