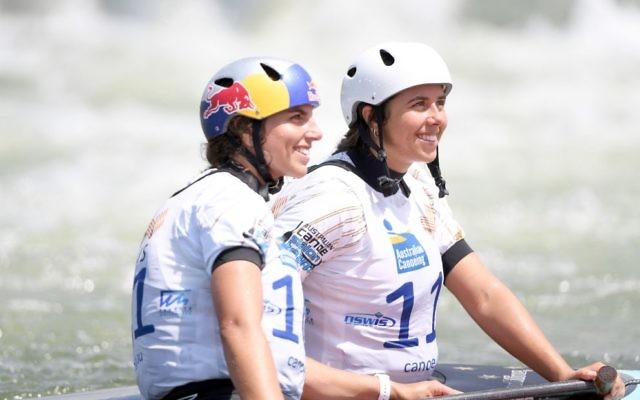 IT was a classy sister act at the 2017 Canoe Slalom Australian Open in Penrith last weekend, with Jewish siblings Jessica and Noemie Fox coming first and second in the women’s C1 (single canoe) final.

The three-time world champion said it was a great thrill to share the podium with Noemie.

“I was really happy with my run, I executed it the way I planned, and I was happy to see the little sis doing well,” said Jessica.

“We train together and we -support each other on the water as well. I think her improving is only going to be better for me as well.

“I know I have to watch my back a little bit.”

The sisters have now qualified for the Australian C1 women’s team for this year’s World Cup series in Europe and for the World Championships to be held later this year in Pau, France.

It will be Noemie’s debut at Pau.

“Jess is the best paddler, and to be able to train with her all the time is extremely rewarding,” said Noemie, 19.

“I’ve grown up with great role models and it’s a really good environment, so I’m happy to be in that situation.”

Jessica also qualified for the Australian team in the women’s K1 (single kayak), and is a two-time Olympic medallist.

She backed up her C1 win at the Australian Open by winning the women’s K1 final, posting one of her best runs ever on her home course.

Despite picking up an early -two-second penalty for a gate touch, Jessica sizzled through the back half of the course to post a time of 96:56 seconds.

That was six seconds ahead of Czech world champion Katerina Kudejova, with Olympic silver medallist, New Zealander Luuka Jones, a further 0:58 back in third place.

“I think that was one of my best runs on this course to date,” said Jessica.

“I think having done the C1 [the day before] motivated me a bit. It’s always a physical demand on your body, and emotionally, when you are doing two events.

“This was a good field. There was a lot at stake, so I was happy to race freely and attack it the way the men paddle.”

Jessica’s double success at the Australian Open puts her in good stead for the long journey to the next summer Olympic Games to be held in Tokyo in 2020, when women’s C1 will be an official Olympic sport for the first time.

Previously, only women’s K1, and men’s K1 and C1, were included in the canoe slalom program at the Olympic Games.