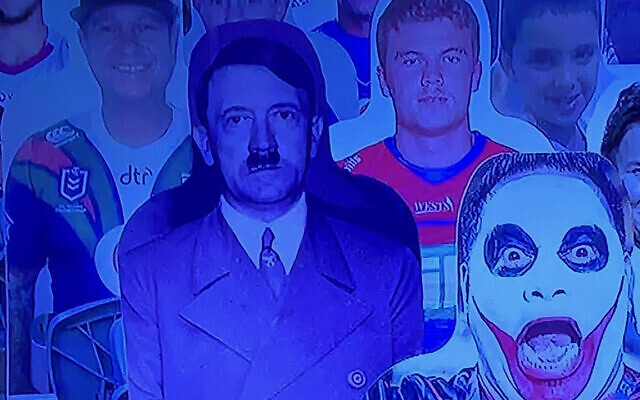 The photoshopped image that appeared on Fox League on Sunday evening.

NRL and television personality Matthew Johns says the segment on his Fox League show on Sunday night – in which a photoshopped image of Adolf Hitler was broadcast on national television – was “in poor taste and completely inappropriate”.

Fox Sports this morning apologised after NRL fans slammed the program for airing the “distasteful” and “shockingly offensive” image.

In a statement on Monday morning, a spokesperson for Fox Sports told The AJN, “Fox Sports is very concerned by an incident involving an inappropriate image shown as part of a segment discussing NRL crowd cut-outs.

“We are currently reviewing the circumstances and examining the action we need to ensure those involved understand it is not acceptable.

“We sincerely apologise for the offence the image has caused.”

Stating, “I need to personally step up to this,” Johns said, “I know how raw and devastating those events remain for so many people and families.

“I acknowledge it was wrong and I apologise to our viewers and to everyone in the community who is rightly concerned and offended by the segment.”

“He fully acknowledged that it was a poor error of judgment and in very poor taste, and I commend him for owning it and acknowledging it.”

Ryvchin called on Matty Johns and Fox to “tell their viewers it’s not on”.

Anti-Defamation Commission chairman Dvir Abramovich said using Hitler to elicit a laugh is “inexcusable, degrades the memory of those who perished in the Holocaust, and is hurtful to survivors and their children”.

“Maybe Matty Johns can explain to us what is remotely funny about a brutal dictator who caused the suffering, torture and death of so many men, women in the gas chambers?” Abramovich said.

“This was a disturbing abdication of judgment and a troubling lack of sensitivity.”

He added, “Was there not a single person on Fox Sports to say that this was a terrible idea, that there was no humour to be milked from genocide?

“I hope that the people involved in this sorry episode reflect on their actions and apologise for a sketch that simply went too far.”

One fan wrote on Twitter, “I understand people can get precious about things and very easily offended but this is not one of those times. You can’t make jokes about Hitler.”

Another wrote, “Sickening. The NRL has really worked hard to change the culture around league and it’s definitely improving so I’m disappointed that someone in 2020 would think Hitler jokes are funny and try and dump them in it.”