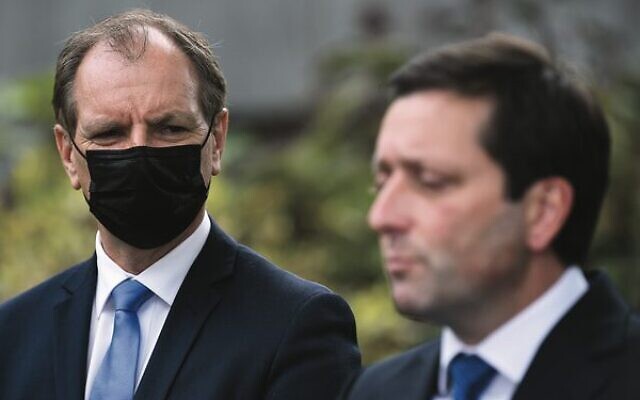 MEMBER for Caulfield David Southwick has reflected on his faith, illegal minyans and the path out of COVID after being announced as deputy Liberal leader last week.

Following a spill motion that was carried 20-11 and with Michael O’Brien handing the party reins back to Matthew Guy, the former DJ walked out to face the media alongside the new state opposition leader as the first Jewish Victorian deputy Liberal leader.

Guy took the opportunity to wish the Jewish community a happy New Year, acknowledging Southwick’s connection to his faith.

Asked after yom tov whether it was appropriate to have been working on Rosh Hashanah, the Caulfield MP told The AJN, “As a member of the party my obligation is to be there and to vote and so I did that, but knowing that, I ensured that I could hear the shofar.”

Having arranged for Rabbi Dovid Gutnick to pass by Parliament House, Southwick and Jewish Labor MP, member for Box Hill Paul Hamer, stepped outside at 4pm to hear the spiritual leader of East Melbourne Hebrew Congregation blow the ram’s horn so the pair could participate in New Year celebrations.

He also recalled that one Chanukah it was confirmed he had held his seat. “There’s something about my connection to my faith that’s a good omen,” he reflected.

Southwick, who took Guy on a trip to the Jewish State in 2017, told The AJN the new leader is a “massive advocate for Israel,” and recalled Guy’s hopes for a “synagogathon,” to get around to as many shules as possible, when he was previously opposition leader.

Questioned about current lockdown restrictions, Southwick admitted that a plan to open up places of worship had not yet been discussed by the Liberals as the party is focusing on businesses and schools, but said that “it is something in the front of my mind”.

In regard to the clash between police and attendees of an illegal prayer gathering over Rosh Hashanah last week, he said the ordeal “set our community back years” and that we would need to work to repair the damage.

“In the whole time that I have been in Parliament, I have never seen such an attack,” Southwick said, adding that he would be working with communal leaders and continuing to collaborate with Labor Member for Macnamara Josh Burns to rebuild the image of the Jewish community.

“We need a plan where people can operate safely, otherwise they do things like we’ve seen which compromises public safety,” said Southwick, criticising the Andrews government for inaction on prayer gatherings over the past 12 months.

He suggested open-air, COVID-safe gatherings instead, which “would surely be better than having these underground activities that are making it almost impossible to be able to police. It causes anxiety, stress and draws attention to all of the community”.

Acknowledging the importance of worship to the ultra-Orthodox community, Southwick commented that religion is crucial for them and that restrictions to practising their religion undoubtedly have many mental-health impacts.

“We need a plan for those with a religious background, whether that be Jewish, Christian, Muslim, to be able to have COVID-safe services,” he said. “We can’t fine our way out of this.”

Southwick acknowledged that “the same issues are happening in other communities but they just aren’t as visible”, adding that “when we as a community call it out because we hold ourselves to a higher standard, then we give that opportunity for the government to also make us an example”.

The new deputy said he plans to take a business-like approach into the next election, to unite his colleagues and to get Victoria back on track with a plan to safely open up the state.

Contrary to what some might assume of the Liberal Party, Southwick said the leadership will be focusing on issues such as environment, mental health, unemployment and public housing.

He added, “I think we could do better in making vaccines accessible. We should have mobile units. Let’s not squabble about it, let’s get the vaccines out and accessible and available. That is our way out.”

Asked by The AJN whether he had his eyes set on the top job, he said he’d rather sit on the backbench if it meant seeing his party in government.

As to whether the Jewish community could ever see the return of DJ Dave, Southwick said, “never say never”.