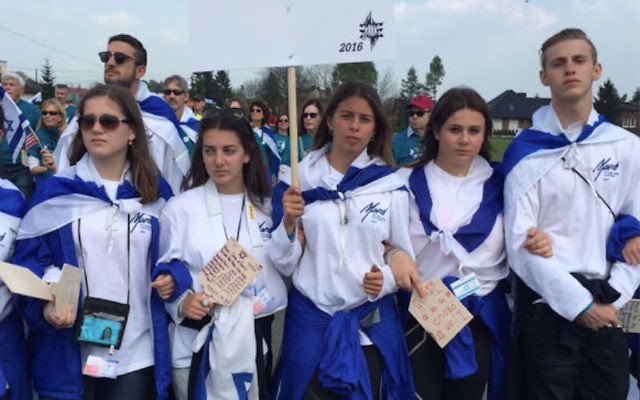 THE Australian contingent of March of the Living (MOTL) returned home this week after an emotional journey  that saw them shed tears for the victims of the Holocaust in Poland and then cheer for the Jewish State’s birthday a week later in Israel.

On Yom Hashoah, the 45-strong adult delegation and 10 year 11 members of the student delegation joined thousands of Jews, non-Jews and survivors from around the world in marching from Auschwitz to Birkenau for a solemn ceremony, including witness testimonies and prayers.

While in Poland, the Australian groups also visited Majdanek and Trebelinka.

From Eastern Europe, they set off for Israel, where the trip included visits to Masada, the Dead Sea and Tel Aviv, as well as experiencing Yom Hazikaron and Yom Ha’atzmaut in Jerusalem.

Discussing the success of this year’s trip, MOTL Australia co-president Cedric Geffen told The AJN that the program deviated from previous years by combining the year 11 students with counterparts from New Zealand and the United States.

“It was the first year we combined  with a group from the US, essentially from Florida and Dallas, and a contingent from New Zealand … The opportunity to mix with students from other countries from a whole different background while being on the program provided a new dimension.”

The organisation also introduced a live streaming service for parents and relatives at home to see their children marching from Auschwitz to Birkenau, which Geffen described as “moving”, as “parents are totally involved without physically being there”.

Year 11 student from the Victorian College of the Arts Emma Stone, who won a scholarship to attend MOTL, said it is a must for “every single ­person”.

She said, “I think it is something that everyone needs to do. I didn’t realise that Poland was going to make such an impact on my life, and I’m so thankful for the opportunity.”

A stand-out moment for Stone was witnessing the amount of non-Jewish participants who felt the need to “bear witness” and “fight to preserve” the stories of Jewish survivors.

“After completing the March in Auschwitz, we walked past a few Korean people holding a sign which read ‘We apologise’ and when we asked them about it, they said that humanity had failed them.”

Stone also raved about visiting Israel for the first time and experiencing the program with Jews from America and New Zealand.

Meanwhile, Lenny Gross and his wife Janine took part in the adult MOTL, with Gross emphasising that it “surpassed all our expectations”.

“It’s an educational experience and it is amazing … It’s a must for anyone who has or doesn’t have roots or has passion for Judaism or the Holocaust, or just humanity in general – it’s unbelievable.”

He added, “If anybody was looking to do something like this, it gives you a good sense of perspective of life and humanity.”