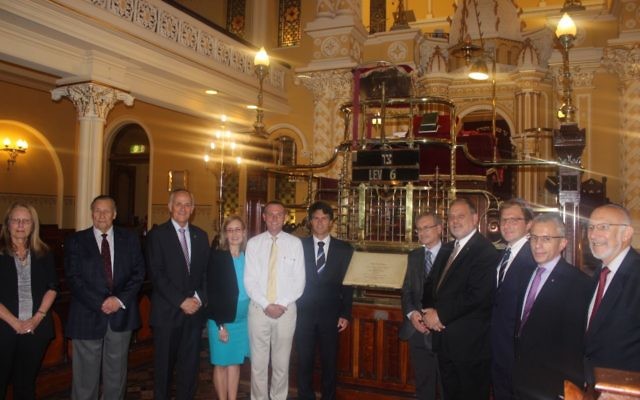 THE NSW government has provided over $16,000 in funding to the Jewish community for its activities commemorating the Centenary of Anzac this year.

As part of the government’s Joining Forces initiative, which encourages multicultural communities to get involved in grassroots Centenary of Anzac activities, $10,000 has been provided to the NSW Association of Jewish Ex-Servicemen and Women (NAJEX) for the Centenary of Anzac Jewish Program (CoAJP).

More than a thousand people are expected to attend a special commemorative service at The Great Synagogue on Sunday, May 3.

Minister for Veterans’ Affairs Victor Dominello, who was joined by Vaucluse MP Gabrielle Upton and Coogee MP Bruce Notley-Smith at The Great Synagogue last week to announce the funding, said: “The NSW government is pleased to be able to support NAJEX and the NSW Jewish Board of Deputies to hold a Centenary of Anzac commemorative service.

“We’ve also provided a grant of $6700 to The Great Synagogue to help restore a First World War honour board [note: there are two], which commemorates more than 300 Jewish Australian soldiers from NSW who served in the Australian Imperial Forces,” Dominello said.

“It’s not widely known that such a high proportion of Jewish Australians enlisted to serve in the First World War, so it’s important that their stories are brought to the fore.”

Notley-Smith added that the funding would allow the stories of Jewish Australian soldiers who served during the Great War to be remembered by future generations.

Upton said: “I commend NAJEX, The Great Synagogue and the NSW Jewish Board of Deputies for their leadership in seeing these important activities realised.”

CoAJP national coordinator and NAJEX board member Peter Allen said he was delighted at the provision of the grant.

“We appreciate very much the state government’s encouragement as part of their Joining Forces initiative to involve various multicultural communities in the Centenary of Anzac commemorations and activities,” he said.

“It’s recognition of the outstanding contribution of the Jewish community, particularly in World War I, as the Minister [Dominello] reflected during his visit to The Great Synagogue.”

A spokesperson for The Great Synagogue said: “We’re delighted at the news that the state government has made available a grant to conserve the two memorial boards to honour servicemen from the Great War.”