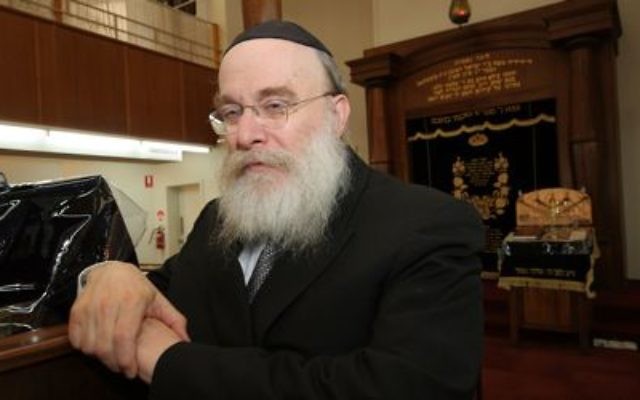 TWO leading Chabad-Lubavitch rabbis have come under fire after they threw their support behind a gathering of ultra-Orthodox Melbourne Jews protesting new conscription laws in Israel that will force members of the Charedi community to serve in the army.

Rabbis Zvi Telsner and Chaim Tzvi Groner added their signatures to a letter calling for a prayer gathering at the Adass-Gutnick Hall to decry the legislation, prompting an angry outpouring from communal organisations, which saw the call to prayer as critical of Israel.

In a statement of their own, the Lubavitch rabbis apologised for signing the letter, which they admitted had a “negative inference to the Israeli government”, but stopped short of withdrawing support for the rally itself.

“Earlier this week we were presented with a letter on which to add our signatures concerning a communal tefillah gathering in relation to the proposed conscription laws in Israel,” the statement read.

“Unfortunately the letter also included a negative inference to the Israeli government which we deeply regret and from which we would like to emphatically disassociate ourselves.”

The AJN understands that Rabbi Telsner attended the event, but that Rabbi Groner was unable to attend.

When contacted by The AJN, both rabbis refused to comment.

“The Mizrachi Organisation deeply regrets that such a public rally has been called.

“It is a matter of great concern that members of the Melbourne Jewish community have decided to publicly protest against a law of the State of Israel, especially one that recognises that it is the duty of all able-bodied adults to share the responsibility of protecting and defending the State of Israel and all of its inhabitants.

“Legitimate dissent and debate should not be stifled. However, a public rally in Melbourne, which by its nature has been designed to attract the attention of the general community and the media, portrays those who organise and support it not merely as critics but as opponents of the State of Israel.”

An open letter written by someone purporting to be called Jacob (Ya’acov) Leichter was quoted in several publications and claimed there were “1000 men, women and children, from all stripes of the Orthodox community, including the majority of its Rabbis” at the rally.

But The AJN understands the letter was written using a pseudonym and according to sources at the rally there were around 400 people and no rabbis representing any mainstream shuls.

Rabbi Meir Shlomo Kluwgant of the RCV told The AJN “The RCV was not consulted in regard to the rally, and even if we had been we would not have supported it”.

“We are disappointed that a rift has developed within the community. We have used our good offices to resolve the issue, but unfortunately have been unsuccessful.”

A statement from the ZCV accused the ultra-Orthodox community of “fear mongering”.

“It is a matter of great regret that such a gathering was convened in Melbourne and that the vituperative campaign on this issue against the government of the State of Israel, the homeland of the Jewish People, continues without regard to the divisiveness and negativity that it has generated,” ZCV president Sam Tatarka said.

The AJN also understands Kollel Beth HaTalmud spiritual leader Rabbi Binyomin Wurzburger attended the gathering, angering Mizrachi backers of the organisation. Daniel Lanzer of Kollel Beth HaTalmud, was contacted but had failed to provide a comment as The AJN went to press.

Adass president Benjamin Koppel insisted the letter bearing the signatures of the seven rabbis, including Rabbi Groner and Rabbi Telsner, wasn’t anti-Israel, but rather “anti the enemies of Torah”.

Rabbi Dovid Rubinfeld of the Melbourne Hebrew Congregation was also present at the rally, but MHC President David Sherr was adamant the rabbi often attends services at Adass-Gutnick Hall when his own shul has no service.

“Any alleged petition in support of the Charedim in Israel that may have been circulated was not seen by Rabbi Rubinfeld nor would he have signed such a document,” Sherr said.

“Rabbi Rubinfeld as the rabbi of MHC shares the stated belief as enshrined in the constitution of the MHC, as being a supporter of the State of Israel, and although like all of us, he may from time to time disagree privately with any pronouncements made by the government of the State, his public support as shared by MHC, is unchanged,” he continued.