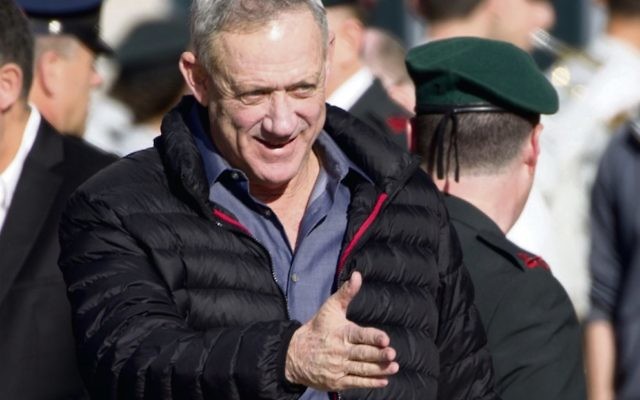 BIBI’S biggest challenger came out of the shadows this week, giving the first hints on his campaign themes. But his campaign launch was overshadowed by a notable Netanyahu announcement on Iran.

Benny Gantz positioned himself as a major threat to Prime Minister Benjamin Netanyahu before he opened his mouth on policies.

Last weekend, he was polling as the preferred PM of 38 per cent of Israelis, just three per cent behind Netanyahu.

Commentators say that if the former IDF chief’s policies impress Israelis as much as his reputation, then his Israel Resilience party could be a major success story. On Monday, after days avoiding public comments, he started to talk politics, kicking off with the thorny issue of Israel’s Nation State Law.

But in an indicator of the uphill struggle he faces, Netanyahu continued to dominate the headlines. The PM avoided getting drawn into debate on Gantz’s comments, and instead spent the week focused on security, an issue that is expected to feature prominently in his campaign.

Netanyahu made a high-profile visit to northern Israel where he took the unusual step of assuming responsibility for an attack on Iranian targets in Syria last weekend. “In the past 48 hours, Israel attacked an Iranian weapons warehouse at the international airport in Damascus,” he said on Sunday.

“This reflects our consistent policy and strong determination to prevent Iran from entrenching itself militarily in Syria. If necessary, we will step up these attacks.”

Netanyahu also used his visit to announce the end of the operation to find and destroy Hezbollah tunnels running from Lebanon to Israel. “The IDF has exposed a sixth tunnel – the largest of all – that crossed into Israeli territory,” he announced. “This brings Operation Northern Shield to a successful close.”

Netanyahu’s associates insisted that he took responsibility for the strikes – even though he normally declines to do so – for strategic reasons and not to boost his popularity. But some of his opponents suggested that he was electioneering at the cost of national security.

Omer Bar-Lev of the Labour party said Netanyahu owned up to the attack in order to take credit for “political” purposes and called the move a “disgrace”.

While there is disagreement on what inspired Netanyahu’s announcement, few are surprised that he is moving the general theme of his comments towards security. Israel is entering uncertain times in defence terms, with the US poised to withdraw from Syria and Iran’s announcement this week that it is preparing to restart enriching uranium, aiming at getting it to 20 per cent.

If Iran goes through with this it could spell the end of the West’s nuclear deal with Iran. As well there is regular violence from Gaza, and last weekend saw violent border protests and rocket fire into Israel.

Netanyahu has positioned himself in past elections as the only leader who can see Israel through such challenges, but Gantz has both strong security credentials and confidence that he can heal some of Israeli society’s frictions. He chose to focus on the frictions this week.

Gantz hosted members of the Arabic-speaking Druze minority at his home, promising to address grievances that Druze leaders have voiced under Netanyahu’s rule.

He discussed Israel’s Nation State Law, which Netanyahu associates call one of their great successes, while it is lambasted by the left and much of the centre as insulting to non-Jewish minorities.

Gantz promised to do “everything in my power” to “fix” the law. He didn’t say he would cancel the law, but rather indicated that he would address the point that most upsets the Druze and many others, namely stripping their language, Arabic, of its official status.

Tzipi Livni, leader of the left-leaning Hatnuah party, welcomed Gantz’s comments but members of Netanyahu’s Likud party responded by saying that Gantz has been “exposed”.

Gantz was trying to avoid being pigeonholed as a right-winger or left-winger, but Likud responded by saying that it is now clear that “Gantz is left.”

Tourism Minister Yariv Levin said: “The real candidate of the left has been exposed and it’s Benny Gantz.”

Until Monday, politicians had widely ridiculed Gantz for staying silent about his positions.

After his comments Avi Dichter, who initiated the Nation State Law, said: “Silence is preferable to this miserable political chattering.”