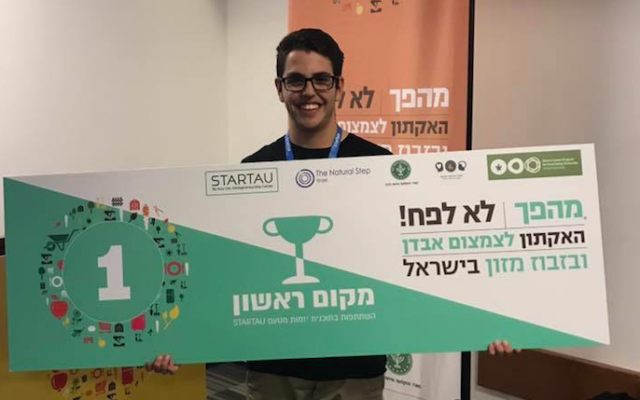 Alon Moss at the winner’s presentation.

But after accepting their boss’s challenge to become the competition’s youngest entrants, it was a brilliant idea by Moss, and plenty of hard work by both young men over the next 24 hours, that saw judges declare their team the winner over 15 other teams made up of experienced industry professionals.

The task set by Israel’s Ministry of Agriculture was to find a business solution to minimise wastage of the country’s annual surplus of fruit and vegetable produce.

Moss, a 2016 Moriah College graduate, saw an opportunity in Israel’s annual surplus of 310 million cucumbers, which happen to be mostly grown in one region.

Rather than leave them to rot in the soil, the cucumbers would be purchased from farmers at a very low price and crushed into a powder for use in cosmetic products, via the start-up venture Moss and Lewis named Neshama.

In pitching the idea, Moss described it as a “win-win-win solution” that reduces waste, helps cucumber farmers and the cosmetic industry, while generating a profit. The judging panel agreed.

Moss told The AJN the competition win, combined with the independence he’s gained and the people he’s met so far on the gap year program, “ensures that this has been the best six months of my life”.

“I’ve always been interested in the idea of a start-up and I am extremely excited that the opportunity has come to me to be in my first,” Moss said.

Moss and Lewis will now receive mentorship, their Neshama team will benefit from experienced additional members, and a final decision to launch the start-up will be made in a few months.