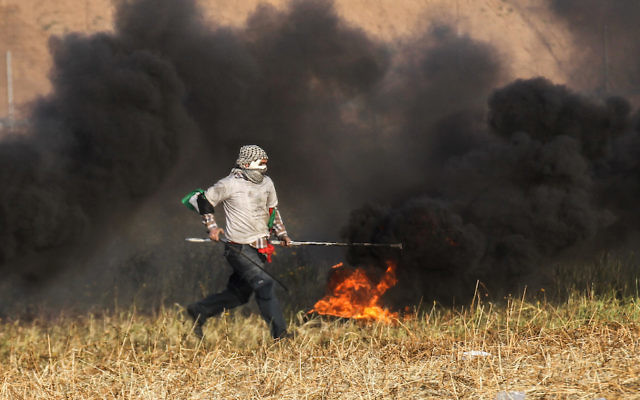 AS the death toll mounts on the Gaza border, Israel insists it will continue to protect the border and its citizens against continued provocation and threats from Hamas.

Eighteen Palestinians have been killed since last Friday when thousands of people joined the Hamas-led “March of Return” protests.

While many gathered around tent encampments set up several hundred metres from the frontier, smaller groups moved closer to the fence, throwing stones, hurling Molotov cocktails or burning tyres.

“We have established clear ground rules and we do not intend to change them,”Defence Minister Avigdor Lieberman said during a visit to the region on Tuesday. “Anyone who approaches the border is putting his life in danger.”

He added that most of those killed were “terrorists that we know well who are active in the armed wing of Hamas and Islamic Jihad. They were not innocent civilians who were part of a civil protest”.

Lieberman, who has also resisted calls for an international inquiry into the IDF’s actions on the border, insisted, “We are not provoking the people in Gaza. We are protecting our citizens.”

According to the IDF, at least 10 of the dead were known members of Islamic Jihad. Two of those killed last Friday were armed and had an explosive device they intended to use in a terrorist attack against Israelis, the IDF said.

A Palestinian killed on Tuesday had been with a group that managed to break a hole in the security fence with a bar, according to the army, which had a video of two of the men walking through the hole and standing on the Israeli side before returning to Gaza.

While the UN, the EU and human rights groups have been critical of Israel’s policy, a number of videos released by the IDF show protesters throwing burning tyres and firebombs and attempting to breach the security fence.

“Our soldiers precisely targeted the specific terrorists that attempted to carry out these acts of terror, some of them known terrorists to our security forces,” Major Keren Hajioff said in one video.

The Foreign Ministry, meanwhile, has released a video stating that Hamas is “preparing for violent riots and armed combat on the Israeli border this coming Friday”.

It showed a photo of thousands of tyres just inside Gaza and said that instructions for homemade bombs had been
distributed.

The tyres are burnt so the smoke will block the view of Israeli soldiers trying to protect the border.

The coordinator of government activities in the territories (COGAT), Major General Yoav Mordechai, said on his Facebook page on Tuesday that Israel “has proof the Hamas terror organisation is forcing bus companies in the Strip to transport rioters and Hamas members to the sites of the violent clashes on the security fence.

Not only that, Hamas even threatens with weapons, imprisonment and even confiscation of buses if the companies don’t obey”.

“This is the true face of the terror organisation, which claims the violent protests are spontaneous and each person has a choice whether or not to participate,” Mordechai added.

Hamas has said the border protests would continue until May 15, the 70th anniversary of Israel’s creation.