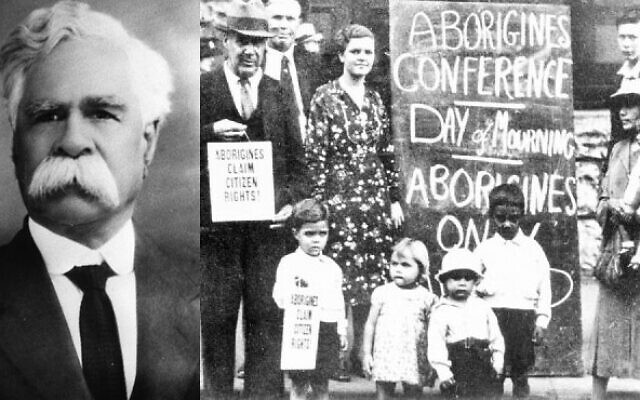 Aboriginal activist William Cooper and his protest against Kristallnacht.

“OFFICIALLY, on behalf of the government of Chancellor Angela Merkel, we are sorry that the 1938 consul general in Melbourne would not accept the letter of the Aborigines League nor forward it on to the political leadership here in Berlin as would have been the right and morally correct thing for a consular official to do.”

They were the words that took 82 years to receive. On Sunday, Federal Government Commissioner for Jewish Life in Germany and the Fight against Antisemitism Dr Felix Klein issued an apology for the German consulate’s refusal to accept the petition of Yorta Yorta man William Cooper and the Australian Aborigines League in protest of Germany’s persecution of Jews in 1938.

Klein continued, “The solidarity shown at the other end of the world of people in greatest trouble is a role model and impressive until today. Unfortunately, there are very few examples like this.”

The German government will issue a historic apology on Sunday, 82 years since the day that Yorta Yorta man William…

Posted by The Australian Jewish News on Wednesday, December 2, 2020

The apology was delivered at the special online event “Lotjbadhan/B’yah’ad/Coming Together”, organised by the William Cooper Legacy Project (WCLP).

Klein acknowledged Cooper’s grandson, 92-year-old Alfred ‘Unlce Boydie’ Turner whom he met with three years ago in Berlin. At that time, Uncle Boydie personally presented a copy of his grandfather’s letter, which was formally accepted.

Said Klein, “We thank him for reminding us that so long as doing the right moral thing remains our guiding values, even those without any basic rights of their own, can be upstanding for others and call out injustice and persecution wherever in the world others might be suffering.”

Klein also thanked the descendants of all of the Aboriginal activists “who took a stance on behalf of the Jews who were persecuted”.

Yorta Yorta elder Dr Lois Peeler is one such descendant and WCLP’s cultural consultant. Following the event, she told The AJN, “While it’s been a long time coming, I’m delighted that we have an apology, that it has been recognised.”

She reflected, “Uncle William Cooper was a wonderful leader, and the people in the Australian Aborigines League were so committed in trying to bring about change of our people – but then had the humanity to protest against the treatment of the Jews across the other side of the world. I think that speaks a lot about what our people were feeling, and still feel.

“Today was wonderful because it was a coming together in solidarity to talk about survival. We have survived. And while we reflect on the past, we don’t dwell on it. We walk together to the future, and I think we are more powerful by being able to do that in unity.”