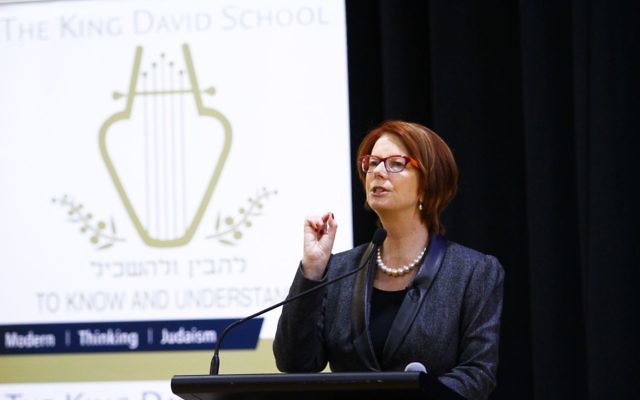 9-6-15. Former Australian Prime Minister Julia Gillard at The King David School where she addressed a gathering of Year 11 and 12 students. Photo: Peter Haskin

VISITING The King David School (KDS) on Tuesday, Julia Gillard fielded questions from year 11 and 12 students on topics as diverse as how to handle extreme pressure and how the clothing style of Australia’s first female prime minister affected her politically.

As a guest of honour at KDS, she was introduced by principal Marc Light, who hailed “her intellect and her integrity and her capacity to work closely with those with differing views”.

Answering a student’s question on what her prime ministerial legacy would be, she listed the White Paper on Australia in the Asian Century, the National Disability Insurance Scheme, the Royal Commission on child sex abuse, the initiative to reform funding to schools, and carbon pricing, “it will be back, inevitable”.

Gillard said she dealt with pressure by making time for private reflection amid the constant clamour of her prime ministerial schedule.

Responding to a female student who asked whether she “felt pressure to look a certain way”, the former PM, whose sartorial choices in the top job sometimes drew flak in the media, said: “Yes, constantly, it’s one of the silly things … but you’ve got to manage it.”

In her address, Gillard urged students to develop “a sense of purpose, a sense of self”, adding for her that purpose was “to transform Australia’s education system”, a cause she said was continuing now, with her chancellorship of Ducere and chairing the Global Partnership for Education.

“Finding that within yourself, what will be motivating for the rest of your life, is incredibly important,” she told the student assembly.

Gillard afterwards told The AJN that “it’s been very nice to see the fruition” of her Building the Education Revolution program and how it has impacted KDS, a funding recipient.

“That program did such a lot of good around the country and often the good wasn’t as reported as the occasional difficulty, but it’s really nice to see it working,” she said.