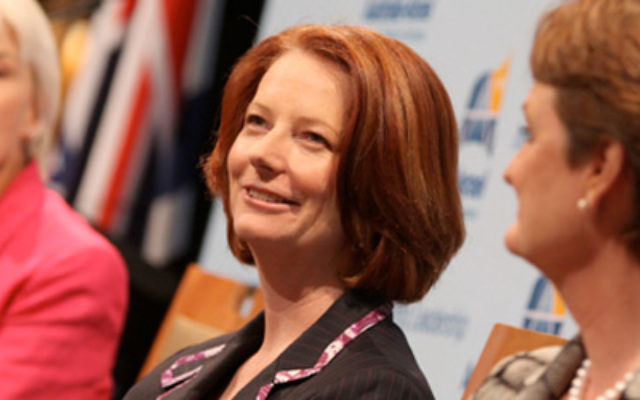 FORMER Prime Minister Julia Gillard will be awarded the 2013 Jerusalem Prize, in recognition of her outstanding contribution to strengthening Australia’s connection with Israel.

As a member of the Australian Parliament and Australia’s first female prime minister, the ZCV says it feels that Gillard demonstrated unwavering commitment to democratic values, as well as ongoing support of the aspirations of Israel’s people for peace and security.

According to ZCV president Sam Tatarka, Gillard “has demonstrated over her entire political career that she identifies and empathises with the Jewish people and our connection with the land of Israel”.

“The Zionist Council of Victoria and the Zionist movement of Australia are honoured to be able to demonstrate our gratitude and respect for Ms Gillard’s many years as an unstinting supporter of the Jewish and Zionist cause,” he said.

Gillard will be presented with the award at the ZCV’s 75th annual assembly on Tuesday, November 26, where she will also deliver the keynote address. The community is invited to attend.

“It is a most special honour to receive the Jerusalem Prize, which I am pleased to accept in tribute to the unshakable commitment of Australia to Israel, the enduring friendship between our two countries, and in furtherance of the democratic values we share,” Gillard said.

In December 2011, Gillard emphasised Israel’s independence and sovereignty as being of central importance to Jewish people ­worldwide.

She made history in June 2012 when she became the first Australian politician to sign a petition to demand a minute’s silence at the opening ceremony of the London Olympics in honour of the 11 Israeli athletes murdered at the 1972 Munich Games.

She also played an instrumental role in granting honorary citizenship to Raoul Wallenberg, and was a vocal opponent to the Boycott, Divestment and Sanctions ­movement.

Gillard has kept a relatively low profile since she was ousted as prime minister and leader of the Labor Party in June.

The event will take place on November 27 at Beth Weizmann for an 8pm start. Bookings are essential. To secure your seat, please contact the Zionist Council of Victoria at zcv@zcv.org.au or (03) 9272 5544.