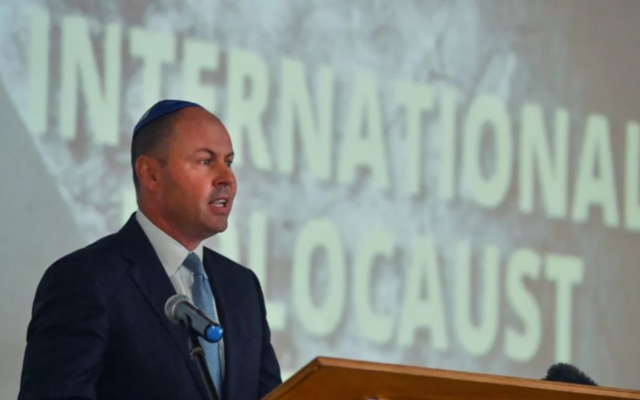 THE Australian government has pledged $750,000 towards the establishment of a new Holocaust museum in the nation’s capital.

Just prior to International Holocaust Remembrance Day, marked on Wednesday (January 27), Liberal MP and Treasurer Josh Frydenberg along with Labor MP Josh Burns emphasised how federal, state and territory governments are “joining forces in a bipartisan way to support the establishment and upgrading of Holocaust museums around the country, promoting tolerance and understanding while combating racism and antisemitism”.

Frydenberg and Burns, both of whom have family members who perished in the Holocaust, said their families’ stories are “not unique but reflect the background of a generation who fled persecution arriving in Australia to seek a better life. We have seen the consequences of ignorance and hate. We have seen the crimes that began with dehumanising one’s fellow countrymen”.

They added, “Holocaust education should be taught in Australian classrooms so the children of today and tomorrow learn from the past and work towards a brighter, more tolerant and inclusive future.”

On this International Holocaust Remembrance Day, we come together across the political divide with a shared message of humanity, history & the rejection of hate.

We all have a role to play to ensure ‘never again.’

Minister for Education and Youth Alan Tudge said the Canberra Holocaust Museum and Education Centre will “allow Australian students, teachers and the wider community to better understand the Holocaust and its impact on our world”.

“Our government has committed funding, in partnership with respective state governments, for the construction of similar centres in Victoria, South Australia, Queensland and Western Australia,” said Tudge.

Today we marked International Holocaust Remembrance Day with survivors & families. We must never forget this tragedy & must never allow anything like it to happen again. We’re providing $750,000 for a new Canberra Holocaust Museum and Education Centre. https://t.co/PhsNXmL5Mz pic.twitter.com/4SovY525rd

ACT Jewish Community Centre president Veronica Leydman anticipates the museum will capture oral testimonies of survivors, so that “future generations, especially students we have coming from ACT schools, can hear directly from a survivor … As we face an increase in antisemitic incidents, rising right-wing extremism, polarisation and other threats to democracy worldwide, we should never forget that the Holocaust began with a dehumanisation of other human beings”.

ACT Chief Minister Andrew Barr said, “Establishing a permanent Holocaust museum and education centre in ACT to continue educating our community about the Holocaust, the roots of prejudice and the ongoing need to maintain a respectful multicultural society is a worthy project.”