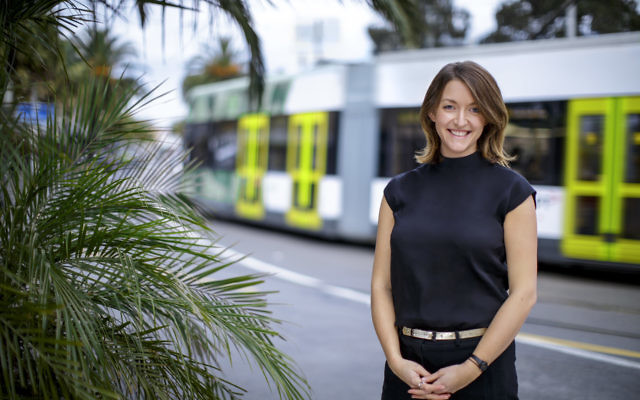 GREENS candidates will attend an election forum hosted by the Australia Palestine Advocacy Network (APAN), but not Zionism Victoria.

Stephanie Hodgins-May has pulled out of The AJN’s election forum for Melbourne Ports because she said she is “not comfortable participating in a forum that is co-hosted by an organisation that isn’t an independent newspaper”, noting that Zionism Victoria is co-hosting the event.

“I don’t believe it is appropriate and right to speak at an event co-organised by a politically active organisation,” she said referring to Zionism Victoria.

Hodgins-May agreed to attend the debate in mid-May.

On May 30 AJN editor Zeddy Lawrence told Hodgins-May during an email exchange that it would be co-hosted by Zionism Victoria.

However, this Tuesday when questioned about her appearance via Twitter she told a journalist that it was his tweet that alerted her to Zionism Victoria’s involvement.

That prompted her withdrawal from the debate.

Quizzed by The AJN today over the email notifying her on May 30, she claimed she had missed it.

Hodgins-May’s comments and withdrawal came as a shock to The AJN and the community because Greens MP Adam Bandt is attending a forum hosted by APAN next week titled, Melbourne candidate forum: Palestine and Israel: adopting a just position.

Hodgins-May said it is not “appropriate and right” to speak at an event hosted by a politically active organisation, but APAN calls for people to “spend just one minute to email candidates asking them to pledge to support Palestine” and recently held an event to “bring awareness to and influence Australia’s public policy regarding the Israel-Palestine conflict.”

After being informed that Bandt would be attending a function hosted by APAN Hodgins-May claimed she would not attend the forum because she didn’t like Zionism Victoria’s stance when it comes to the United Nations.

“I was unaware when I accepted that it was also being co-hosted by an organisation that holds strong political views, including in relation to the United Nations,” she said.

“As someone who worked at the UN and holds their work in high regard, I have chosen not to participate in the now co-hosted forum.”

The AJN has contacted Adam Bandt and Greens leader Richard Di Natale this morning for comment but has not received a reply.

Meanwhile, Zionism Victoria has urged Hodgins-May to reconsider her decision.

“The ill-informed prejudice of the candidate toward our organisation is particularly regrettable and reflects adversely on her suitability as the representative of all of the citizens of Melbourne Ports,” a statement from the organisation read.

“Her decision is all the more galling given that the Greens candidate for Melbourne seems to have no problem participating in a forum organised by the Australian Palestinian Advocacy Network (APAN) and exposes the Greens animus toward Israel” added executive director Jane Rapke.

Calling on Hodgins-May to change her mind, Rapke said, “The forum is about giving our community the opportunity to get to know the candidates and their positions on a range of issues but even if it was solely about Israel there is no excuse for a candidate in this electorate to dodge whatever hard questions might be asked about her party’s platform on this issue of great importance to the Jewish voters of Melbourne Ports”.