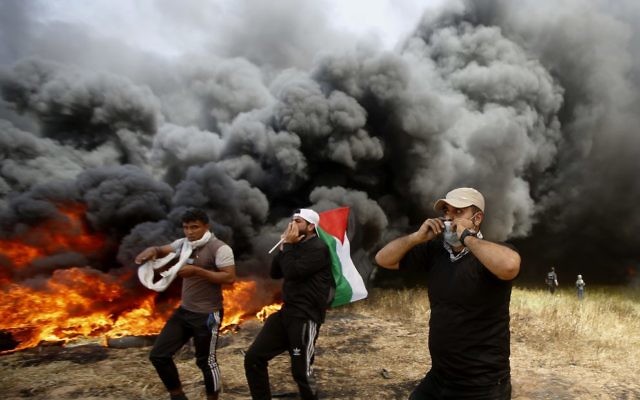 Palestinian protesters chant slogans next to a wall of smoke from burning tires designed to obstruct the view of the IDF who are trying to defend the border. Photo: AP Photo/Adel Hana

HAMAS is vowing to continue its march on the Israeli border, unfazed by a weekend of violence that claimed a further nine Palestinian lives.

“We will break the walls of the blockade, remove the occupation entity and return to all of Palestine,” Hamas leader Ismail Haniyeh declared on Monday.

He was lauding Gazans for the so-called March of Return, that is scheduled to run until mid-May, with the main events taking place each Friday, when large crowds gather.

Israel says that the IDF is acting correctly to prevent a possible breach of its border by marchers from Gaza, and against protesters who are attacking soldiers.

“IDF troops have been dealing with shootings against them, placing of explosive devices on the fence, throwing of grenades, firebombs and stones, as well as smoke screens to prevent IDF soldiers’ action,” the Israeli military said in a statement.

The IDF has not only defended its actions at the border, but also an operation it conducted on Monday.

It bombed Hamas targets in northern Gaza, after claiming that a group of Palestinians infiltrated Israel and planted explosives by the border.

According to Israeli Prime Minister Benjamin Netanyahu his country has “one clear and simple rule”, which is “if someone tries to attack you – rise up and attack him”.

But Haniyeh claimed that Gaza residents are engaged in a “peaceful, civilised, and popular march”.

The International Criminal Court has indicated that it takes issue with both accounts.

ICC prosecutor Fatou Bensouda noted that 27 Palestinians have reportedly been killed by the IDF in the last fortnight and more than 1,000 have been injured – “many, as a result of shootings using live ammunition and rubber bullets”.

Violence against civilians “could constitute crimes under the Rome Statute of the International Criminal Court”, she claimed.

Hamas conduct may also constitute crimes, Bensouda suggested, referring to “the use of civilian presence for the purpose of shielding military activities”.

Hamas’ use of civilians is under scrutiny among some Palestinians, as well as by the ICC. Hamas is “only selling illusions, trading in suffering and blood, trading in victims”, according to a close aide of Palestinian President Mahmoud Abbas.

Hamas tells its people to “go and die so that we’ll go to the T V and media with strong declarations”, said Mahmoud Al-Habbash, Abbas’s Islamic affairs adviser, in a sermon delivered in front of the President.

According to a translation by Palestinian Media Watch, Al-Habbash claimed that Hamas’ “acts of ‘heroism’ don’t fool anyone anymore”.

Hamas started the march keen to push Gaza back onto the international agenda, and this has happened as a result of the Palestinian deaths and injuries – with one death in particular attracting attention.

Yaser Murtaja was a cameraman for Palestinian Ain Media, and was wearing a vest marked “press” when he was fatally shot by Israel when he was near the Gaza border last Friday.

Protesters claim that soldiers targeted press out of spite or because they wanted to deter media from covering the march, and Murtaja’s employer, Ain Media, says it “will knock on all doors and will continue with legal institutions to hold the Israeli occupation accountable for this heinous crime”.

The IDF insisted that it does “not intentionally target journalists”; security officials have been quoted saying that he was actually a Hamas operative, who had used his drones for Hamas intelligence gathering, and Israel’s Defence Minister Avigdor Lieberman suggested that Murtaja put himself in danger by operating a drone above soldiers.

Lieberman also claimed that Murtaja had received a salary as a member of Hamas’s military arm since 2011. But his colleagues dispute this, and point to revelations that the US State Department vetted Murtaja’s media agency and awarded it a grant of $US11,700 to suggest that he was a bonafide journalist without Hamas ties.