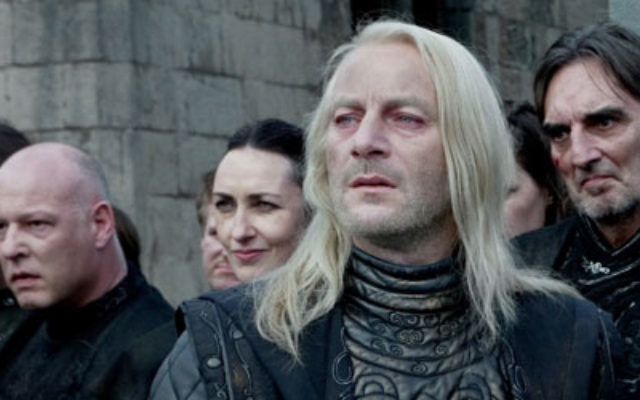 WITH numerous villainous roles safely tucked beneath his cape, Jason Isaacs insists he does not always play the bad guy, despite attempts to pigeonhole him following his portrayal of Lord Voldemort’s sinister sidekick Lucius Malfoy in the Harry Potter film franchise.

The Jewish actor is quick to remind me of a different type of role: “I saved the world in Armageddon!”

Isaacs is “absolutely heartbroken” that the Potter films have come to an end after a decade, with last week’s release of Harry Potter and The Deathly Hallows: Part 2.

“It’s awful. It was such a fabulous thing to be part of. And it’s made me cool in my kids’ eyes, which is a good thing,” he says.

“Harry Potter is a gift to the world. The books ignite a love of learning, which I’ve seen first hand with my own daughter. She read all seven books in just three weeks when I said she could come to the film premiere if she finished them. She devoured them!

“The films give people of all ages and cultures, from every corner of the globe, so much happiness. Nothing but good comes from them. And there hasn’t been a drop in quality from the first to the last – they just got better and better.”

For more videos, go to JNTV.

Having spent a lot of time on set with fellow actors Tom Felton (Draco Malfoy), Helen McCroy (Narcissa Malfoy) and Gary Oldman (Sirius Black), Isaacs says he connected most to those he had scenes with.

“In Harry Potter and The Deathly Hallows: Part 2 there is a big sequence in the courtyard with everyone who is still alive. It was an unbelievable treat to look around me and see an entire pantheon of film stars and to then sit in the rain drinking tea together.”

Isaacs says he is rarely recognised without his signature blonde wig. “Kids never recognise me from the Harry Potter films. Parents know me from other things and say to their kids, ‘Look who it is,’ but children look at me blankly. And then they ask me to tell them who I am. So I say that I play Lucius Malfoy in the Harry Potter films and the children cock their heads slightly and say, ‘No you don’t!’”

Having been stalked for seven years – a case that ended up in court – Isaacs relishes in his relative anonymity, which is almost unheard of for an actor of his stature.

“That stalker put me off enjoying how fanatical some people get.”

But he still has to endure the occasional crazy fan. “I was at a film premiere in America and a woman came up to me and said, ‘Don’t think I’m nuts but …’ She unbuttoned her shirt to reveal my name tattooed across her chest! She said, ‘You think I’m nuts, don’t you?’ I just said, ‘No, no, of course not!’ I just signed something – not her breasts – and moved on.”

Liverpool-born Isaacs moved to north London when he was 11. He came from a traditional Jewish home and experienced some anti-Semitism in his teenage years, mainly from the momentum behind the far-right National Front in the 1970s.

He is quick to refer to the related political messages Harry Potter sends out. “It was interesting for me to play someone full of race hate. Every time Lucius Malfoy said ‘Muggle’ I thought ‘Jew’.

“The character of Lucius is as far from a Jew as I will ever play. He is quite clearly a Nazi. That’s what’s so ingenious about JK Rowling’s work. It is about hatred and bigotry and narrow mindedness, progression and mortality. The fact that there are real-life parallels is brilliant.

“Rowling doesn’t make the nuances so heavy-handed that she preaches, but they are there. When playing Lucius I was always thinking of ways to make it real without it seeming like a pantomime.

“You only need to switch on the TV or read newspapers to know right-wing politicians are springing up all over Europe on an anti-immigration ticket, saying the things people were saying in 1930s Germany. It’s the same language –just swapping Jews for Eastern European immigrants. This hatred and ignorance, if unchecked, always comes to the surface.”

Although Isaacs describes his Jewish background as “tight-knit” – his Eastern European great-grandparents were founder-members of the Jewish Liverpudlian community – the 48-year-old describes himself as non-religious.

As he calls it: “A Jewish man who does almost nothing Jewish in his life. I don’t believe in God. My children asked me why and I told them. But I still enjoy the traditions I grew up with – the seder night, Chanukah and Shabbat prayers.

“I grew up in a traditional home and inherited a lot of Jewish customs which I enjoy. My kids love celebrating Chanukah and Christmas because it means they get presents throughout December. But they know their mum isn’t Jewish and, so far, they haven’t engaged with the notion of a God. So who knows what they will want to do in terms of religion when they grow up?”

With plans to move to Los Angeles in a few weeks for the TV series Awake, Isaacs has no specific long-term goals – just clear family ones. “I want my kids to be healthy and happy. I don’t really make plans. Wonderful opportunities just keep coming my way.”