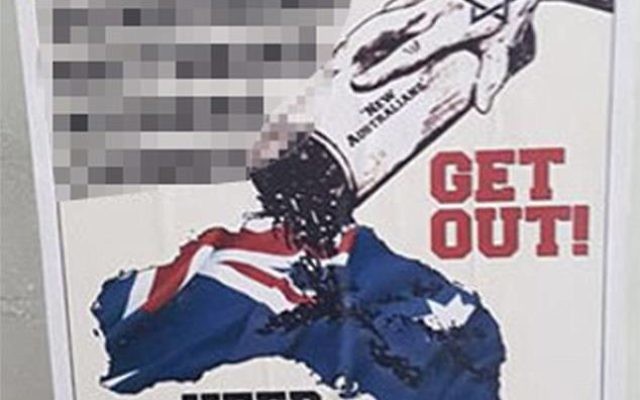 One of the posters that was plastered on schools in Melbourne last weekend.

THE Jewish Community Council of Victoria (JCCV) has condemned racist and anti-Semitic posters which were plastered across two of Melbourne’s leading schools over the weekend.

A neo-Nazi youth organisation called the Antipodean Resistance has claimed credit for the posters which used racist slurs about blacks and Asians, and reportedly called for the murder of Jews to be legalised.

One poster depicted a Nazi-style image of a Jew alongside the words “multiculturalism”, “degeneracy” and “reject Jewish poison”.

Another shows a hand with a Magen David pouring immigrants into Australia, alongside the slogans “get out” and “keep Australia white”.

The posters were discovered at Melbourne Grammar School and Melbourne High School.

Denouncing the posters as “gutless” and “cowardly”, a cleaner at one of the schools told 3AW, “Luckily the teachers got there first to cover them up.”

A poster that was plastered on schools in Melbourne last weekend.

JCCV President Jennifer Huppert stated, “I am appalled. This form of hatred on our doorsteps, on the doorsteps of our schools is terrifying and is a direct attack on Victoria’s prized multiculturalism.

“To direct this at children is even more reprehensible.

“Unfortunately, domestic neo-Nazis and white supremacists appear to be emboldened by events overseas, and we must stop this hate speech in its tracks.

“History shows that hate speech can lead to hate-filled physical attacks, as we have seen very recently in Charlottesville.”

The sentiment was echoed by Education Minister James Merlino.

“These sorts of vile and disgusting comments and posters are not acceptable in the community and those individuals that placed them should be ashamed of themselves,” he said.

Confirming they were investigating the posters, a police spokesperson said, “Every Victorian has the right to feel safe and secure in the community and Victoria Police will not tolerate any attempts to incite hatred or violence … We ask anyone who witnesses, or is subject to discrimination or victimisation on the basis of ethnicity or religious beliefs to inform police immediately.”

On a Twitter post claiming responsibility for the posters, Antipodean Resistance said, “These high schools are overrun by nonwhites, which is encouraged by our traitorous government.”

The group’s website states, “We’re the Hitlers you’ve been waiting for.”