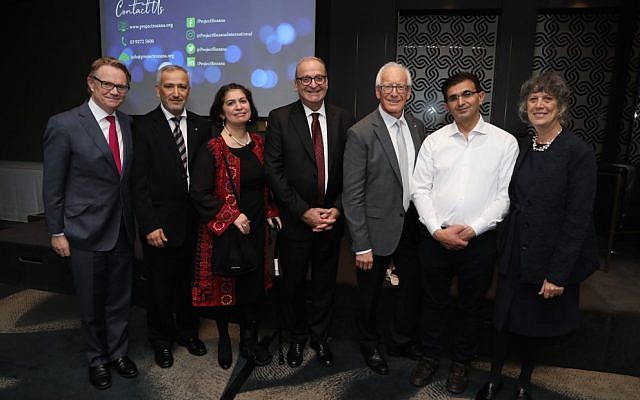 THERE has been media coverage this week about threats reported by Muslim community leader and Belmore GP, Dr Jamal Rifi, targeting him for his cooperation with Jewish community members to support a medical charity called Project Rozana.

Rifi is a board member of this charity which supports the transport, treatment and training of Palestinian health workers for the benefit of Palestinian patients, especially children, as a result of limited services in certain medical specialties in Gaza and the West Bank.

There is only one way to respond to people who condemn enabling children to get medical and psychological care: and that is to start advocating for that care yourself.

The supporter of Project Rozana who convinced me to donate was a tiny boy called Abdallah. He lives in Hebron on the West Bank with his four siblings. Every day his mother takes him across a checkpoint into Israel for kidney dialysis. When his mother asks him to explain why he goes to Jerusalem, he says emphatically, “So that I get well. So that I live.”

If Abdallah survives, it will be in part due to the goodwill of two volunteer drivers: one a young Palestinian man and the other an older Israeli Jewish woman. They are two of over 60 Palestinians in Gaza and the West Bank and 2000 Israelis who volunteer their time for the charity, Road to Recovery.

They cooperate to transport Palestinian patients to receive medical care that is not always available in the Palestinian Territories. Road to Recovery, which is supported by Project Rozana, was founded by Yuval Roth after he lost his brother in 1993 at the hands of Hamas terrorism. Roth’s response to grief and trauma was to strive to make a positive difference.

In 2017, I met Roth and other Israeli members of Road to Recovery at the Gaza Crossing. I was travelling with a group of Christians and Jews on a journey hosted jointly by the NSW Jewish Board of Deputies and the Uniting Church. We saw with our own eyes how this hospital transport scheme builds empathic relationships between individuals of all faiths and political views. Who doesn’t want to help sick children survive?

The Palestinian section of Road to Recovery was established relatively recently and the number of its drivers is growing steadily. These drivers take the patient and family member to a checkpoint where they can enter Israel. The Israeli volunteer driver is waiting on the other side. In an ever-more polarised climate of conflict, these car trips bring so-called enemies together for a humanitarian common purpose that builds friendship and respect.

It was a pleasure to see this same humanitarian impulse in Sydney in late May when 320 Muslims, Christians and Jews gathered for the Hand in Hand dinner to raise money for Project Rozana.

Nearly half the crowd was Muslim and 30 per cent were Jewish. Federal, state and local government politicians mingled with community leaders and international representatives. The event patrons were businessman and philanthropist David Gonski and NSW Shadow Minister for Education Jihad Dib. The cross-cultural warmth demonstrated by these two men, when they spoke together, set the tone for the whole evening.

Project Rozana is not only helping Palestinian children get medical attention for physical illness and injuries. It is developing the capacity of Palestinian and Israeli clinicians to support children with PTSD as well.

Anyone who has visited the Israeli communities on the border of Gaza – as I have in 2017 and again this year with another multi-faith group hosted by the NSW Jewish Board of Deputies – knows that many children sleep, wait for buses and play in bomb shelters. Children know they must run to shelters when they hear sirens. The children in Gaza and the West Bank also live with the ever-present threat of danger.

Child psychiatrist and trauma expert, Professor Esti Galili-Weisstub was interviewed by journalist Hugh Riminton at the Project Rozana dinner about her work training Palestinian and Israeli clinicians to treat post-traumatic stress in children. This joint training, in English, at the Binational School of Psychotherapy in Jerusalem, also enables Palestinian and Israeli professionals to meet in a safe, respectful context and develop clinical partnerships. This kind of connection is all too rare in contemporary Israel.

Dr A. Abdel-Rahman, head of the Hebron-based Green Land Society for Health Development, accompanied Galili-Weisstub and spoke of his work to expand the Road to Recovery transport scheme to the West Bank. These two colleagues showed the collegiate, mutual respect that extremists of all kinds abhor.

“Normalisation” is a term of condemnation that is used to attack people and projects that seek to link people across the Palestinian and Israeli divide, even when the initiative has a clear humanitarian purpose.

Abdel-Rahman captured the essence of Project Rozana when he told the dinner guests in Sydney: “The only normalisation I support is making it normal for children to get medical care.” His comment was met with warm applause.

After Project Rozana founder Ron Finkel closed proceedings, I walked out into the Sydney night, surrounded by Muslim and Jewish people mingling together, and I felt that rare commodity: hope.