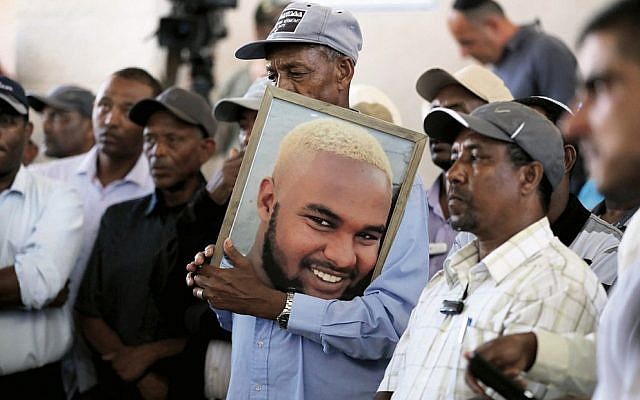 Family members and friends hold a picture of Solomon Teka during his funeral. Photo: EPA/Abir Sultan

ISRAEL’S Ethiopian community has been thrust into the spotlight following the tragic death of a 19-year-old teenager on June 30. Solomon Teka of Haifa was shot by an off-duty policeman under controversial circumstances.

It has yet to be proven that the young man was intentionally targeted, but the uncertainty has done little to quell long-simmering tensions between police and a prominent minority group, which are spiralling out of control.

I was in Israel when the event occurred and it was heartbreaking to see the distress of the family, their friends and the wider Ethiopian community. Equally, I saw how the riots impacted many other Israelis who believe the social fracture may be difficult to heal.

But I was fortunate to witness a revolutionary program at Hadassah Hospital in Jerusalem’s School of Nursing, which is going a long way towards integrating young Ethiopians into Israel’s healthcare system. That system, arguably one of the best in the world, has the capacity to change society for the better. I have seen that numerous times over the years, but never more positively than in the last 12 months.

Hadassah Australia has decided to create a nursing fellowship for young Ethiopians. Each fellowship is valued at $25,000 per annum for three years and our plan is to fund 10 of these.

We decided to support an initiative called Achotenu (Hebrew for “Our Sister”), which has allowed dozens of young Ethiopian-Israeli adults to enrol in a Bachelor of Science in Nursing program at the Hadassah–Hebrew University Henrietta Szold School of Nursing. Significantly, all of the students currently enrolled were accepted without the requisite psychometric exam, which has been an impediment to students from Ethiopian and other marginalised communities from studying at Israeli universities.

As a result of the early success of Achotenu, the program will expand to comprise a cross-section of other marginalised sectors in Israel.

But the focus today is on the Ethiopian community. And it could not be timelier.

The Jewish community in Ethiopia, also known as Beta Israel (or House of Israel), can trace its history back at least 15 centuries. For most of that time, they existed in isolation and, as a result, developed a unique set of religious practices not known or accepted by Jewish theological leaders in Israel.

One example was an order of Jewish monks, founded in the 15th century to strengthen the community’s religious identity and resist Christian influence. Other practices put them at odds with the mainstream Israeli community, most notably after they arrived in significant numbers as part of Operation Moses between 1984 and 1991.

The challenges involved in integrating young Ethiopians into Israeli society are many. Our interest relates to the number of Ethiopians attending university. Only 11 per cent of Ethiopian Israelis aged 22 to 35 have an undergraduate degree, compared with 42 per cent of all Israeli Jews of the same age.

Hadassah Australia realised that we had an opportunity to assist the integration through the hospital’s proactive support of Achotenu. And we have “skin in the game”. Over the years, Australians have given generously to the airlifting and resettlement of Ethiopian Jewry, and we recognise that not only is the integration multi-generational, it is a key to the economic development of the Ethiopian community and to Israel more broadly.

Nursing is part of Hadassah’s DNA. Henrietta Szold, the founder and inspiration behind the Hadassah story, introduced westernised medicine to Palestine at the turn of last century, through the agency of nursing.

Importantly, many young Ethiopian-Israeli men and women expressed a strong desire to become hospital nurses, which is seen as a respected and well-paid career.

And yet, there is a massive shortage of hospital nurses in Israel. According to the 2013 Organisation for Economic Co-operation and Development Index, the nurse-to-patient ratio in Israel was ranked 35th of 35.

This is a disturbing statistic, but one that augurs well for the future of the Achotenu program if we choose to support it.

Ron Finkel is president of Hadassah Australia. Donations can be made through hadassahaustralia.org/achotenu.