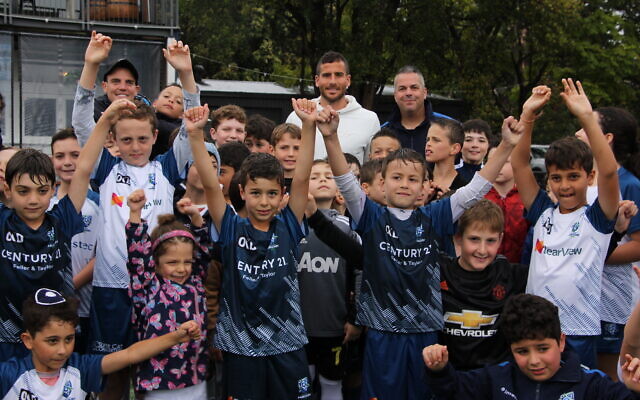 AFTER soaking up the atmosphere of debuting for his new club, the Western Sydney Wanderers, in their A-League Men’s opening round 0-0 draw against Sydney FC last Saturday night in front of 23,000 fans at CommBank Stadium, Israeli striker Tomer Hemed took the time to meet hundreds of Jewish boys and girls at Maccabi-Hakoah Junior FC’s gala day the next day in Sydney’s east, where he received a hero’s welcome.

Hemed was busy all game, and almost scored in the 84th minute when his chip attempt landed just centimetres above the goal.

He felt the draw was a solid result, but acknowledged not everything went smoothly for the Wanderers in attack. 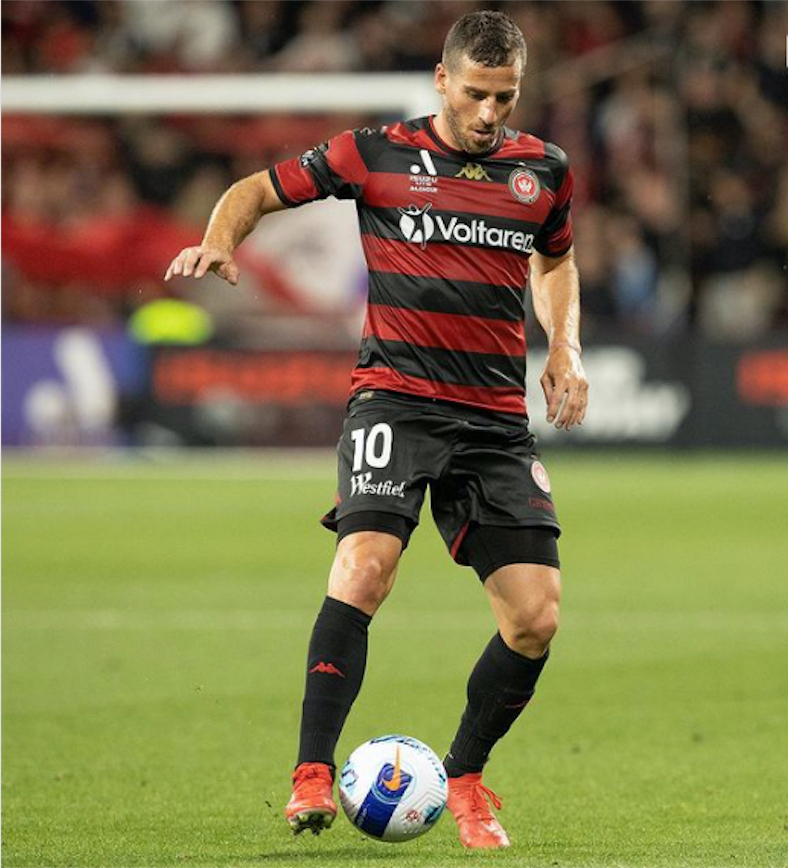 Hemed in action for the Wanderers against Sydney FC in round one of the A-League Men’s season. Photo: Shane Desiatnik

“For our first game, in a squad that has nine new players – against one of the best-organised teams in the league – we needed to show that even if we couldn’t win, that we could compete and fight hard,” Hemed told The AJN at the gala day at Easts Rugby Park.

“I think we did that, and that was important, as we keep building combinations, and improving from game to game.

“I know we have the ability up front to score many goals – we just need to keep working hard together.”

Hemed – who scored 11 goals in his inaugural A-League season with the Wellington Phoenix –said it was exciting to play in front of a big crowd that chanted from kick-off to the final whistle, given last season’s crowd restrictions.

“The atmosphere in the stadium felt like matches I used to play in Europe and England,” he said.

“It’s something I was so happy to see here, and it’s going to be great for us as a team to have such passionate fans behind us.

“We will be giving it everything to make them happy.”

Hemed also heaped praise on Jewish Australian 22-year-old striker Jordi Swibel, who has joined the Wanderers from Sydney FC on a football scholarship, but did not play in the season opener.

“I’m so happy for Jordi, and that the club has signed him, because he is a good young player with a great attitude at every training session – he will help us and is prepared to do whatever is needed,” he said.

The Wanderers will host the Newcastle Jets in round two this Sunday from 6.15pm. 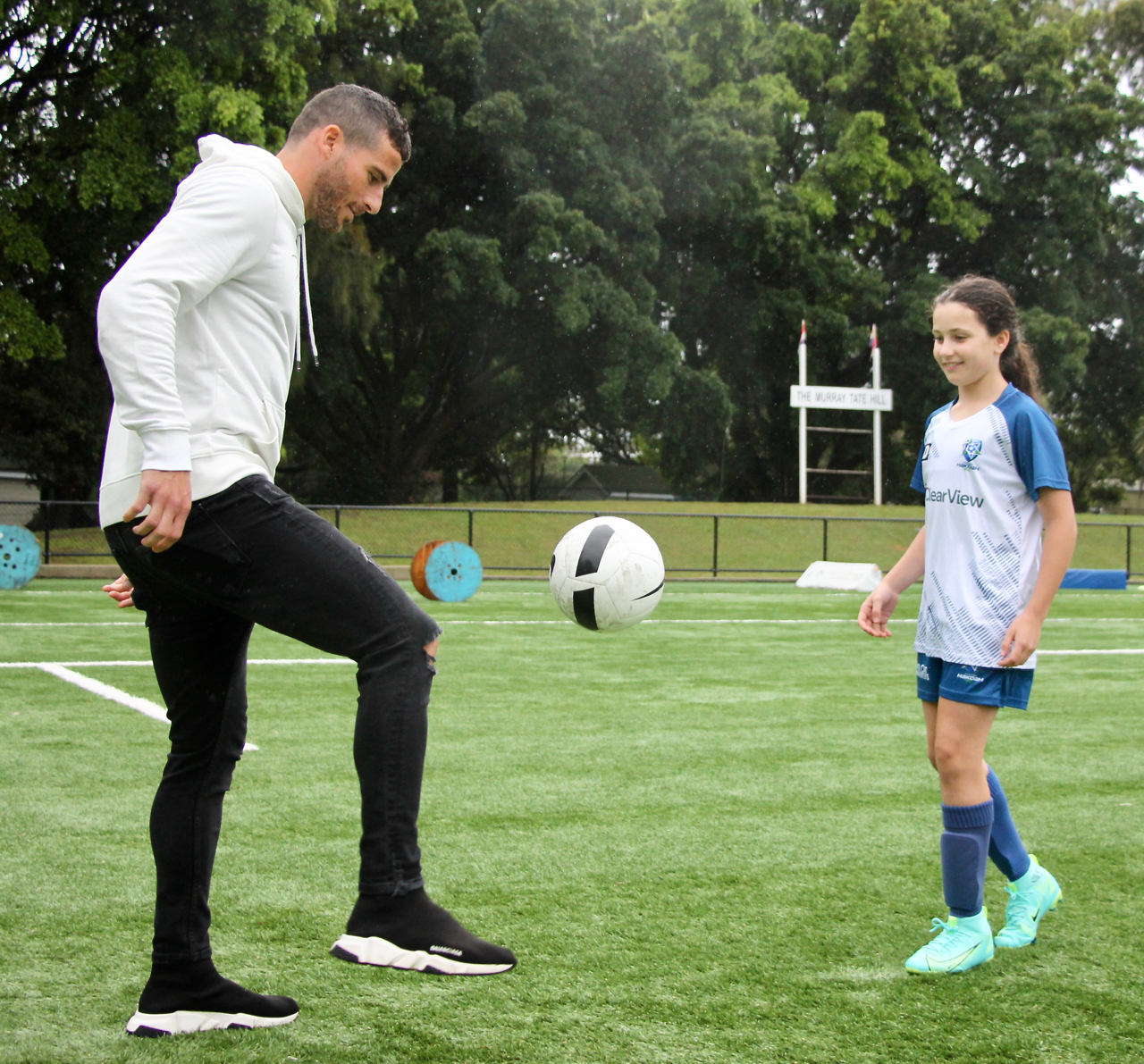 Hemed offered some tips to the Maccabi-Hakoah kids, signed autographs and appeared in scores of selfies, staying around for more than two hours despite the bad weather. 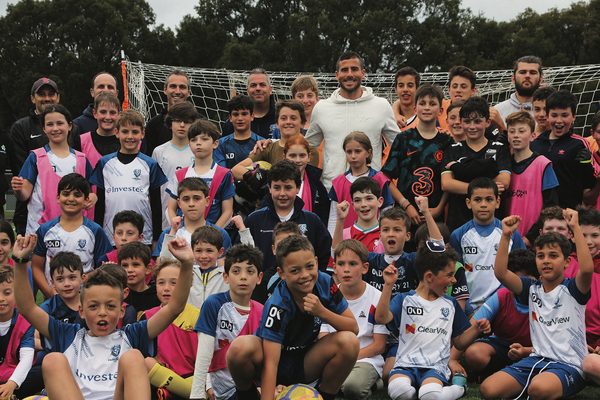 He offered the kids, aged 5-13, the following advice: “Believe in yourself and do everything to achieve your dreams, but above all else, be a good person, be good to your parents, and try hard at school.”

When asked what it takes to be a good footballer, Hemed said, “practice, practice practice … and I mean with a real football, not the FIFA video game!” 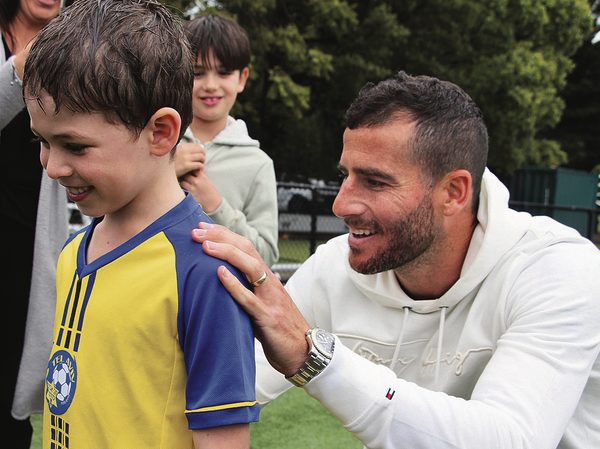 New president at the club, Dani Zaidel, thanked Hemed, saying, “He played a full game last night, so for him to come here today in the rain, shows just what a good guy he is – always happy to assist our club whenever required.”

Zaidel said due to the shortened junior season last winter, holding the gala day “was important as a way to finish the year with a celebration for all the kids to enjoy”. 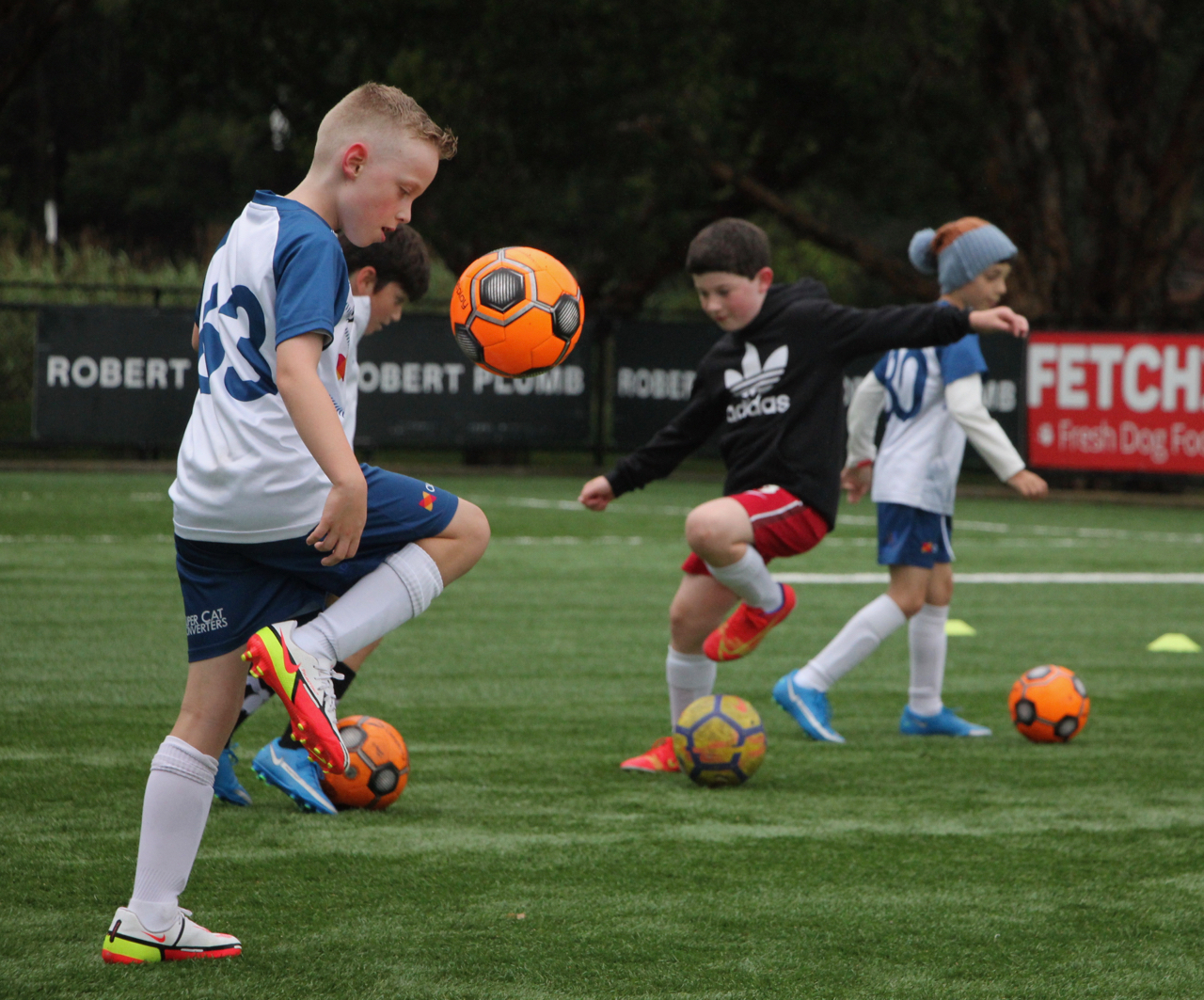 He added, a big focus for the club in the next 12 months is the creation of an introduction to football program for boys and girls as young as four and five.

“There were about 30 kids in that age group enjoying the gala day, who are in that first intake, which was great to see,” Zaidel said. 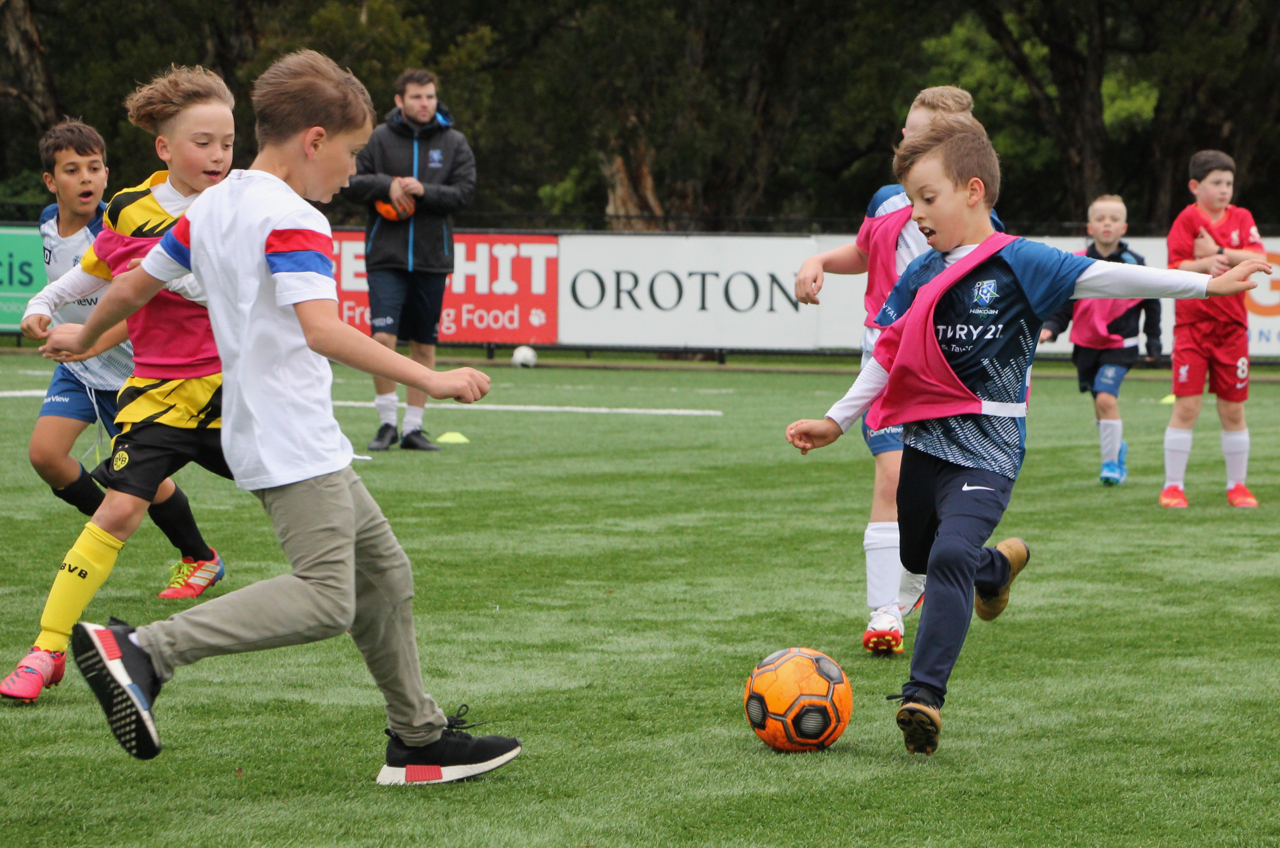 He said the club currently has six girls’ teams, “and we also want to continue to steadily grow that over the next few seasons”.

For more information about Maccabi-Hakoah Junior Football Club regarding the 2022 season, email info@maccabi.com.au. 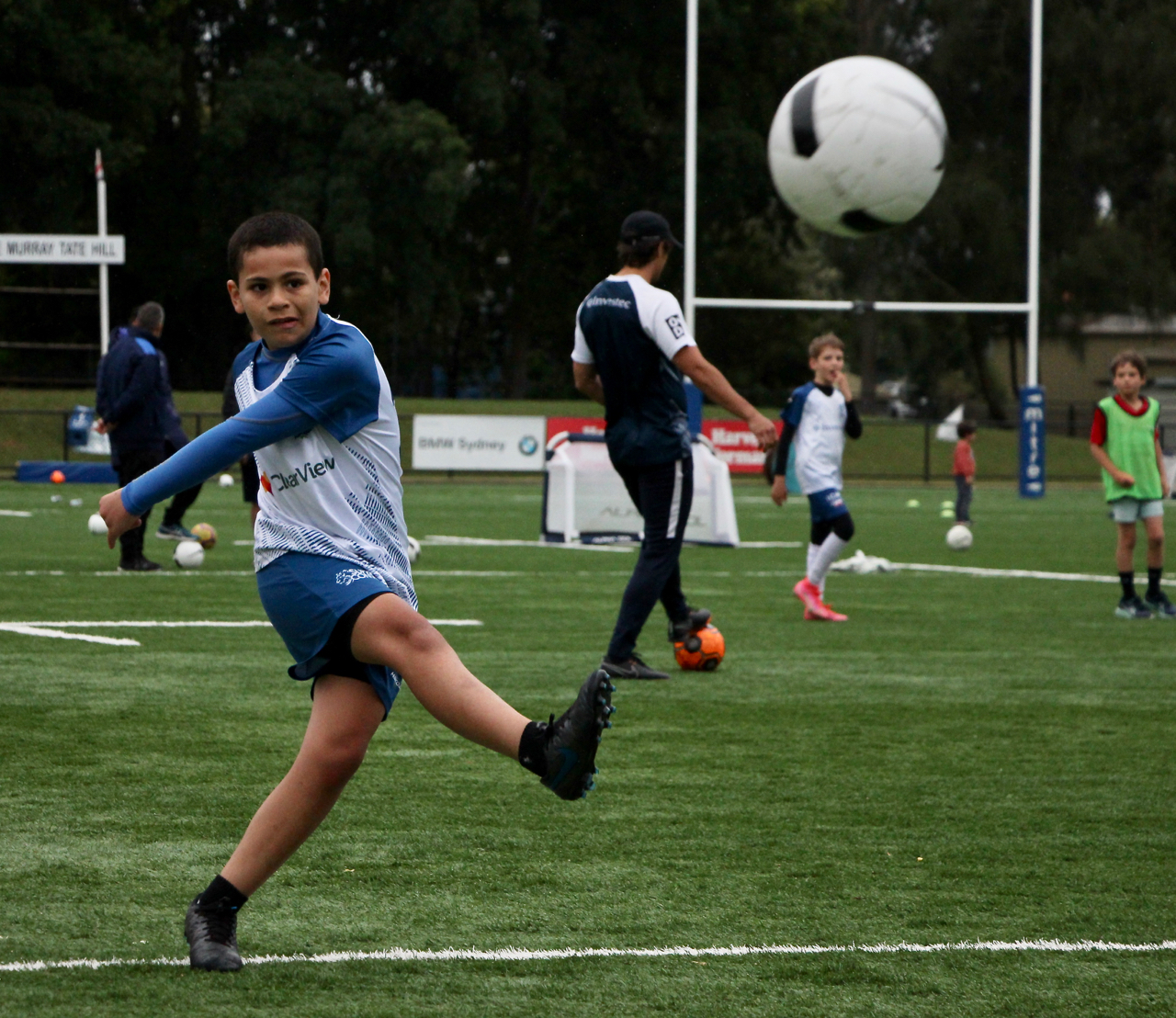