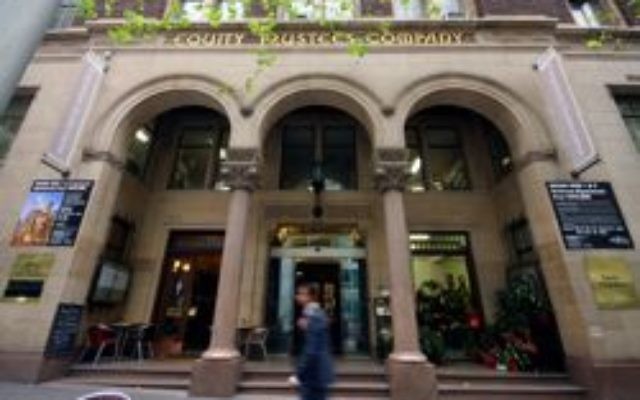 HERITAGE Victoria is campaigning to protect the site of Melbourne’s first synagogue from any unsympathetic development.

The building, now known as Equity Chambers and since 1930 the home to legal offices, was the original location of Melbourne Hebrew Congregation (MHC). The land had been granted to the fledgling congregation by the Port Phillip District in 1844, only nine years after John Batman established himself on the banks of the Yarra River.

Almost two years ago, developers Williamson Properties were given planning approval to build a 16-storey apartment block at 472 Bourke Street. The developers’ plans show the facade of the building, some of which was part of the synagogue, will be retained.

With construction yet to begin on the new development, Heritage Victoria this week recommended the building, which it said is architecturally significant as an example of “exotic revival architectural styles”, be added to the Heritage Register. A spokesperson for Heritage Victoria said the public can make submissions via the organisation’s website until June 22 regarding the significance of the site. If accepted, the building would join a list that includes Ballarat Hebrew Congregation and Trades Hall, among many other culturally important sites.

MHC life governor and past president Eric Cohen told The AJN that Melbourne’s first shul was situated at the back of the Bourke Street block and held around 100 worshippers.

The Argus newspaper reported on August 13, 1847, that a building would be constructed for people of the Hebrew faith. On the 25th of that same month, a foundation stone was laid by synagogue president Solomon Benjamin. A scroll was placed in the foundation stone referring to the congregation as the “remnant of Israel”, a name that MHC still uses today.

Alongside the shul ran a small road named Synagogue Lane. Today, it is known as Little Queen Street, with Cohen suggesting the name may have been changed due to vandalism. However, the street sign displayed today pays tribute to the lane’s heritage.
With money flush during Victoria’s gold rush and the local Jewish population growing, Cohen explained that the foundation stone for a new 400-500-seat synagogue on the same site was laid in 1855. It was a large building and the pillars outside Equity Chambers are remnants of that synagogue.

In 1927, the building was sold to Equity Trustees and by 1930, MHC members had moved to their illustrious new home in South Yarra, where they remain to this day.
Williamson Properties’ plans for the apartment block show the building will continue to look similar from street level, with a tiered glass tower to be constructed behind the facade.