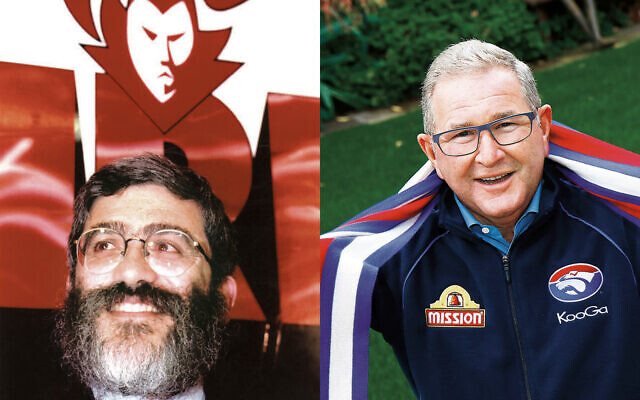 Joseph Gutnick in the early 2000s as Demons president. David Smorgon ahead of the 2016 Grand Final.

SATURDAY’S AFL Grand Final will make Jewish history as the first one in the VFL/AFL’s 124-year history that will be seen from the first bounce by Shabbat-observant Jews in eastern Australia, among them ardent Demons fan and former club president Joseph ‘Yossl’ Gutnick.

For decades, shomer Shabbat Jews could not watch the pre-COVID Saturday daytime grand finals at the MCG, and even last year’s Saturday night final in Brisbane began before Shabbat was out.

But this year’s decider in Perth, which begins at 7.15pm on the east coast, will see Gutnick, a business magnate and Australian Chabad icon, on his sofa for the opening siren, cheering on his Demons against the Western Bulldogs.

Gutnick, however, won’t be the only Jewish former club president clamouring for victory. Barracking for his rivals, the Doggies, will be fellow businessman and communal stalwart David Smorgon.

Speaking from Tasmania where he is working on business ventures, Gutnick noted, “There’s not a lot of Jews where I am, but there’s a lot of Melbourne supporters.”

Lockdown-free, he plans to attend Launceston Synagogue for Shabbat, then watch the match on TV with friends.

The Demons supporter was 12 when Melbourne won its last flag in 1964. When his father, the late Rabbi Chaim Gutnick, was appointed to Elwood Shule in the 1950s and moved the Sydney family south, the Demons and their rising star Ron Barassi were hot properties.

“So who else would you barrack for if you came to Melbourne?” Gutnick reminisced.

A member for 25 years, he served as club president from 1996 to 2001. But when the Demons faced Essendon in the 2000 Grand Final, he couldn’t watch that Saturday afternoon decider. He bears no malice to opponents who triggered his 2001 resignation after differences over the club’s direction, followed by an unsuccessful bid to regain the presidency. “It was a long time ago.”

Asked if the Demons can now win their 13th premiership, Gutnick said, “There’s a passion and a drive. Those are normally points that get you across the line.”

When The AJN asked 1997-2012 Western Bulldogs president Smorgon if the club can snare its third premiership, he chuckled, “I’ve just hung up from Yossl Gutnick who has a different view than me!”

“This is our second Grand Final in five years, and I said to my grandchildren, ‘You’ve been spoiled’. In their time, they’re going to see as many grand finals as I’ve done in my 74 years. I missed the ‘54 Grand Final, I was too young, and in ‘61, when we played Hawthorn, I was at cadet camp,” he recalled.

Smorgon first thought about trying to make it to Perth for the game, but will watch it at home.

The lifelong supporter was taken to his first Bulldogs match after his father’s cousin, on the club’s committee, invited him in 1954, its first premiership year. Smorgon told The AJN he has been “hooked on the Bulldogs ever since”.