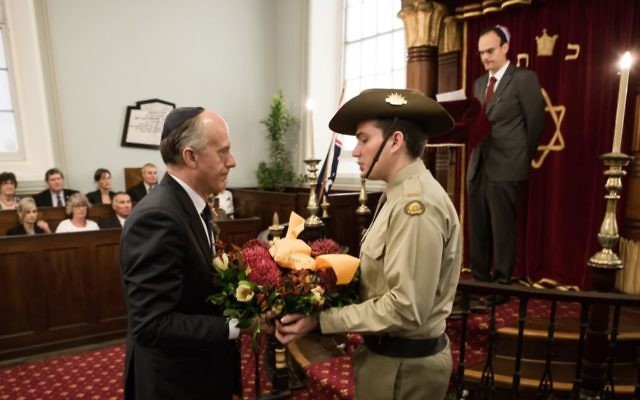 AUSTRALIA’S oldest synagogue proved a fitting venue to host a ceremony that was 100 years in the making for Tasmanian Jewry.

Hobart Synagogue, built in 1845, was filled with dignitaries from across the Apple Isle, interstate and even overseas on October 30, to observe the Anzac Centenary Remembrance Service for Tasmania’s Jewish community.

Jewish chaplain Rabbi Yossi Friedman, Abetz unveiled a roll of honour inscribed with the names of 42 Tasmanian Jews who served in the Boer War, WWI and WWII.

National coordinator of the Centenary of Anzac Jewish Program, Peter Allen, said, “The 15 Tasmanian Jews that served in the Australian Imperial Force in WWI held the same desire as all Diggers – to fight for peace, freedom and tolerance.”

Allen made special mention of two Diggers on the honour roll who paid the ultimate sacrifice for their country.

They were: Second Lieutenant Herbert Ansell, killed in action while trying to fix a gun near Bapaume, France on October 23, 1916; and gunner Felix Bloch, who was killed in action in France by an exploding shell on August 17, 1918.

Major General Professor Jeffrey Rosenfeld, a former surgeon general of the Australian Army, spoke of the proud record of 7000 Jewish servicemen and women, including 350 who were killed in action.

He highlighted the valour of Jewish Victoria Cross recipient Lieutenant Leonard Keysor; the tactical know-how of General Sir John Monash and the respect he showed for his soldiers’ lives; and the continuing commitment to service of Jewish Australians in the ADF since WWII, “no less exemplified than by Private Greg Sher, who was killed in action in Afghanistan on January 4, 2009”.

Following the service, a reception was held at Hobart Town Hall, where Schmidt presented Hobart City Council with a framed photograph of the roll of honour.