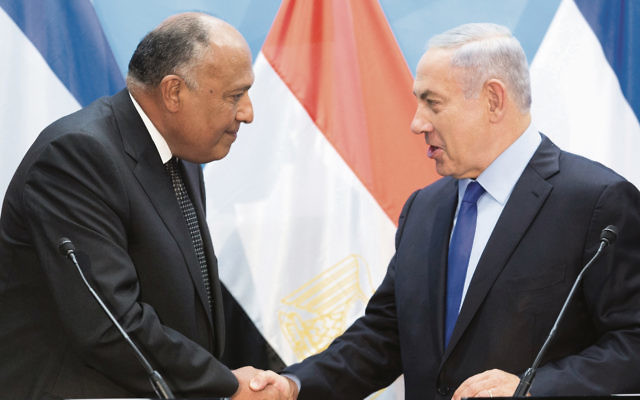 FOR the first time in almost a decade, Egypt’s Foreign Minister visited Israel this week, signalling the new diplomatic romance between the two countries is thriving.

Just four years ago, Israelis and Egyptians were asking whether their 1979 peace treaty would survive.

There was an Islamist, Muslim Brotherhood member, Mohamed Morsi, serving as Egyptian president and relations with Jerusalem hung in the balance.

But after Morsi was forced out in 2013, the Cairo-Jerusalem relationship began to improve, and over the last few months, it has entered what some analysts have called a “honeymoon” period, with Egypt’s ambassador reinstated in Tel Aviv and security ties deepening.

It was a visit of reconciliation and optimism – which is believed to have ended with an Egyptian offer to host renewed Israeli-Palestinian peace talks.

Shoukry said that Egypt is ready to help the two sides achieve peace. “Egypt remains ready to contribute towards achieving this goal,” he said. “We greatly value the trust of both sides and the international community in our commitment to peace, stability and justice.”

Egypt’s President Abdel Fattah el-Sisi said in May that his country’s treaty with Israel should serve as a model for an Israeli-Palestinian peace.

Shoukry was in Israel to reiterate the message and start – behind closed doors – talking details of how such a peace agreement can be reached.

“Such a monumental achievement will have a far-reaching, dramatic and positive impact on the overall conditions in the Middle East region,” he said, insisting that “the vision of the two-state solution is not far-fetched”.

Terrorist attacks, often unleashed during foreign visits as militants try to capitalise on the added international attention on Jerusalem, were kept at bay – though there was a shooting attack against an Israeli car in the West Bank on Saturday, the day before Shoukry arrived. The driver, Eitan Finkel, was moderately wounded, but his wife and five children, who were travelling with him, were unharmed.

The Shoukry visit came as Israel is on something of a charm offensive. Covert connections with several Arab powers, including Saudi Arabia, are said to be growing. Israel signed a reconciliation agreement with Turkey last month, bringing a long-running feud to an end. And last week, Netanyahu was in Africa, building relationships with several African countries. “Israel is coming back to Africa; Africa is coming back to Israel,” he said repeatedly during his tour.

Netanyahu became the first Israeli Prime Minister to visit Ethiopia, and last Thursday addressed the country’s parliament. Echoing his message in Uganda, Kenya and Rwanda, he said that he wants to see Israel cooperating with African countries on defence and a range other issues.