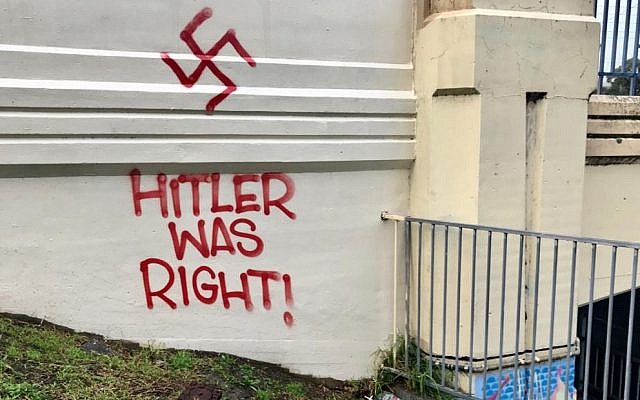 Less than two weeks after a Jewish-owned cafe in Chadstone was vandalised with swastikas and Holocaust-denying messages, passers-by spotted the words “Hitler was right!” spray-painted on a wall in Ashwood, accompanied by a swastika.

The words “Hitler youth” were discovered nearby.

In a statement to The AJN, a spokesperson for Victoria Police said its investigation into the incidents “remains ongoing”.

“Every Victorian has the right to feel safe and secure in the community and in practising their faith, pursuing their values, beliefs and interests,” the spokesperson said.

“Victoria Police does not tolerate violence and takes all crime seriously, including that which is motivated by prejudice, racism or discrimination.”

Describing the graffiti as “cruel and chilling”, Anti-Defamation Commission chairman Dvir Abramovich said, “It is now clear that the swastika epidemic that has invaded the streets of Melbourne over the last year is reaching fever pitch, and it’s hard to imagine the anguish Holocaust survivors must be feeling.

“In fact, we know that white-supremacists are ramping up their sickening campaign of harassment, with the aim of instilling fear in the hearts of residents.”

Stressing the need to adopt a “zero-tolerance approach to this growing cancerous hate speech and incitement”, Abramovich called on the state government to convene a roundtable of leaders from across the religious, social and political spectrum “who can come together and agree on effective measures to fight against the toxic hatred that is threatening our way of life and safety”.

“This is an issue on which we should all stand shoulder to shoulder,” he added.