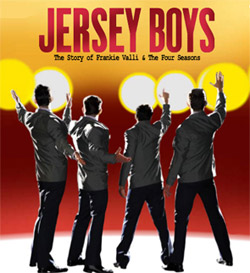 IT’S the season for musicals based on rock ‘n’ roll sensations with Jersey Boys and Buddy currently holding sway in Melbourne, with the two shows opening in rapid succession.

Jersey Boys is set around the rise to stardom of Frankie Valli and the Four Seasons in the United States during the 1960s.

The show moves at breakneck speed as the boys start singing in the backstreets of Jersey, scandalise the staid country sounds of the local radio station and start producing hit records under the guidance of record producer Bob Crewe (played by Daniel Scott).

However, it is the long list of hit songs that really wow the audience, including rock numbers such as Sherry, Walk like a Man and Big Girls Don’t Cry and ballads such as Bye Bye Baby and My Eyes Adored You.

One of the keys to the success of Jersey Boys is the strong storyline as the band faces a struggle to make the big time, at first through the band members’ brushes with the law and later through De Vito’s gambling and loans from the mob.

There is also Valli’s strained marriage to Mary (played by Lisa Adam) and a family tragedy.

Jersey Boys is currently playing at the Princess Theatre, Melbourne.